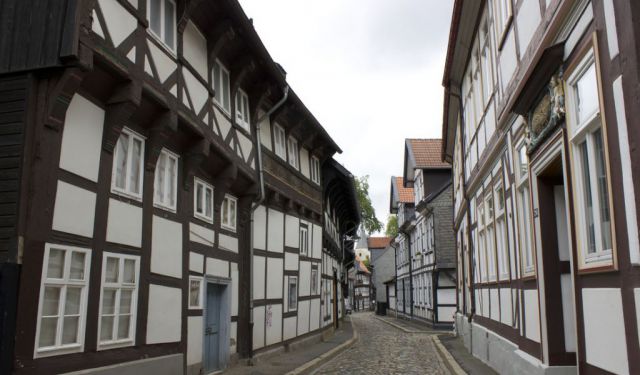 Upon my first footsteps through the quaint and quiet streets of Goslar, I could not believe my eyes. How does a place like this still exist in Germany after World War II? Goslar, a small town located next to the Harz Mountains, is one place that everyone should visit while in Niedersachsen.

Known as the “Queen of the Harz”, the only thing missing are the jesters, peasants and children wearing rags that meander the streets. Goslar is an untouched and majestic medieval town that sparkles with history. The only way to describe Goslar is that it really is a fairy-tale town pulled directly from a Grimm Brother’s book. Just by the looks of the buildings you can feel the existence of Hansel and Gretel come alive.

City center is not far from the Hauptbanhof (central train station) and it’ll take several minutes of meandering past the modern plagues of Kartstadt and H&M before getting to the good stuff. First, I recommend getting lost in the side streets on and around Bäckerstraße to explore its thousand-year-old history and _____ faux houses, the traditional half-timbered homes. Here, you’ll explore buildings constructed in the 15th and 16th Century with wonders such as, “How many people have lived in this very apartment?” ...... (follow the instructions below for accessing the rest of this article).
This article is featured in the app "GPSmyCity: Walks in 1K+ Cities" on iTunes App Store and Google Play. You can download the app to your mobile device to read the article offline and create a self-guided walking tour to visit the attractions featured in this article. The app turns your mobile device into a personal tour guide and it works offline, so no data plan is needed when traveling abroad.