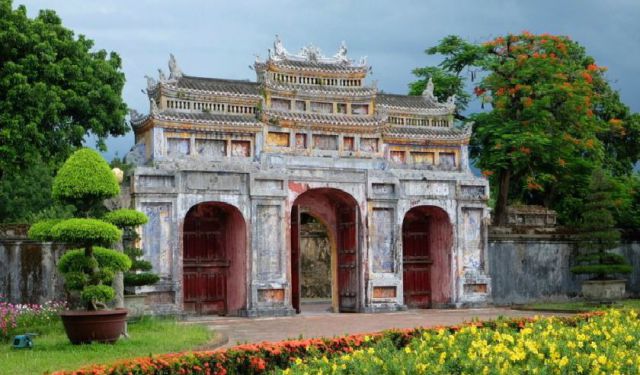 Historical and Romantic City of Hue, Hue, Vietnam (B)

When I booked my train tickets and hotel stay in Huê, I didn’t know much about the city except that it is a historical city and its main attraction is the Imperial Citadel. I didn’t have high expectations either because all I wanted was a break from Hoi An, a popular touristy town in Central Vietnam. There was nothing wrong with Hoi An except that I wanted to break my one-week stay in Hoi An with side trips to the countryside and to another city nearby to avoid boredom.

From 1802 to 1945, Huê (pronounced ‘hway’) was the national capital, and political, cultural and religious centre of Vietnam. Huê was ruled by the Nguyen Dynasty which ended when Emperor Bao Dai abdicated in 1945 to make way for the communist government led by Ho Chi Minh who moved the capital of Vietnam from Huê to Hanoi in the north.

Sadly, many parts of the imperial city were destroyed during the Vietnam War or the Vietnamese calls it the ‘American War’. Huệ was captured by the Viet Cong (VC) for 24 days during which the VC and American forces exchanged fires resulting in heavy casualties. In order to take over the city, the American forces had no choice but to target at some of the ancient structures which ended up largely damaged. ...... (follow the instructions below for accessing the rest of this article).
This article is featured in the app "GPSmyCity: Walks in 1K+ Cities" on iTunes App Store and Google Play. You can download the app to your mobile device to read the article offline and create a self-guided walking tour to visit the attractions featured in this article. The app turns your mobile device into a personal tour guide and it works offline, so no data plan is needed when traveling abroad.