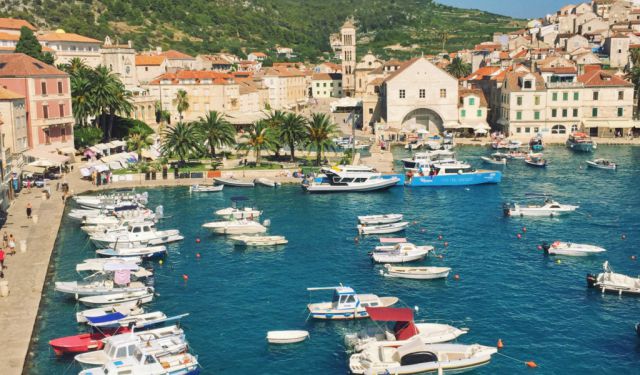 Like much of Croatia, Hvar Island is home to some magically pristine water, charming old towns, and classic Croatian views, but lets be real – Hvar has the best nightlife in Croatia so we know what you’re really here for. Hvar town is small and quaint during the day but quickly comes to life at night when travelers from all over the world emerge for a night out at some pretty famous venues. Under a two hour catamaran ride from Split, it’s pretty much a must-do in Croatia. This Hvar guide is specifically intended for Hvar town (on hvar island), but I also mention another few places that are fantastic to visit on the island.

Standing sentinel above the town, you will find big, grey, 450-year-old Spanjola Fortress. It was built by the Venetian Empire to protect the town from Ottoman invasion – built in the 1550’s, burnt to the ground, and rebuilt in the 1570’s – and still stands the same way today but as a tourist attraction.

It’s just about a 15-20 minute walk to get there, first up some stairs from the main square then up a switchback trail to the top. I take all my groups up there and it really is manageable! Plus, you’ll want to work off some of the drinks you’ll be having later! ...... (follow the instructions below for accessing the rest of this article).
This article is featured in the app "GPSmyCity: Walks in 1K+ Cities" on iTunes App Store and Google Play. You can download the app to your mobile device to read the article offline and create a self-guided walking tour to visit the attractions featured in this article. The app turns your mobile device into a personal tour guide and it works offline, so no data plan is needed when traveling abroad.