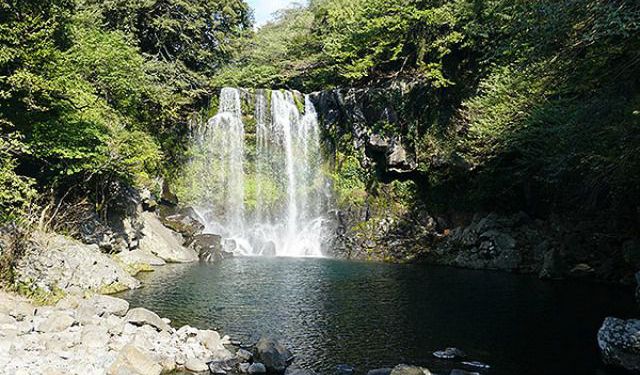 In & Around Seogwipo’s Scenic Spots, Seogwipo, South Korea (B)

We had planned to spend the last 3 days, of our 10 day trip to Jeju, in Seogwipo — the southern part of the island. Inter-terminal buses connect different sections of the island and run at a hourly frequency. We took a bus from Jeju-si (north) and reached the south in about an hour or so. We stayed very close to Jungmun Beach, a paradise for honeymooners, and yet, we never made it to the beach itself. Staying here gives you access to the beach, seafood restaurants, and Cheonjeyeon Falls. Since most hotels have a check-in time of 3 pm, we left our bags at the concierge of our hotel, and head directly to the falls. There’s a small souvenir shop and lunch house before the ticketing entrance. We settled for a meal of pajeon(Korean pancake) and meat soup.

The diversity of Jeju’s natural habitat still surprises me. So far, we’d explored scenic coastal routes, golden beaches, lave tubes, stunted oreums (parasitic volcanoes), green meadows, and dense ecological forests. As we descended towards the source of the Cheonjeyeon Falls, we discovered yet another gem — a subtropical forest. We’ve never made it to the Amazon rainforest and yet, this is what I’d imagine the vegetation to look like. The source of the waterfall originates from a cave (below a bridge) and creates the first waterfall. The pool of water, formed from this waterfall, becomes the source of two other waterfalls — formed at two subsequent steps. In November, the rain was sporadic and the first waterfall had dried. Named as, ‘Pond of God’, the turquoise water reflected the jagged edge of the rocky face of the cave. In the afternoon, there were relatively fewer tourists. ...... (follow the instructions below for accessing the rest of this article).
This article is featured in the app "GPSmyCity: Walks in 1K+ Cities" on iTunes App Store and Google Play. You can download the app to your mobile device to read the article offline and create a self-guided walking tour to visit the attractions featured in this article. The app turns your mobile device into a personal tour guide and it works offline, so no data plan is needed when traveling abroad.