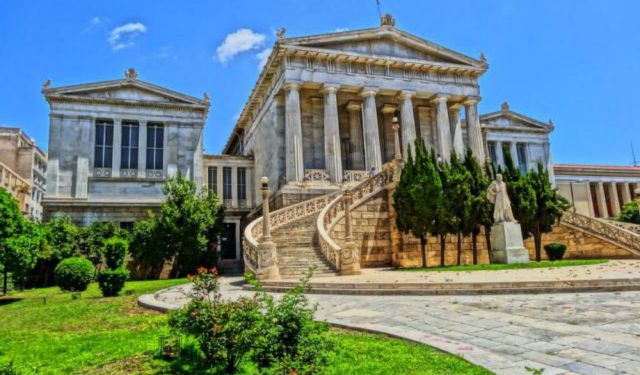 In Search of Old Athens, Athens, Greece (B)

Many people say that besides the Acropolis and the major archeological sites, there is little of architectural substance in the city of Athens. I completely disagree. Those who explain Athens away as merely a concrete jungle are guilty of not having their eyes open when they walk the streets of Greece's capital city. Actually there are many distinguished buildings scattered throughout the city, most built before the 20th century in the neo-classic style. Many of these have been restored and some of those that have not are in the process of being restored. You could compare it to New York City because many of the old beautiful buildings and homes were knocked down in the name of 'progress' (or greed) and replaced with apartment buildings. If you can find an old postcard of Athens from the late 19th century, you can wander around and find the buildings which are still in existence. (See Athens: The Way It Used to Be)

Athens is no Vienna or Paris in the respect that there are no large sections of the city that have remained intact for hundreds of years (except the Plaka). But Athens is a new city compared to all of those cities, even more new than New York. Before the late 1800's Athens was basically a village, and that village still exists in the Plaka and Anafiotika neighborhoods where you can still walk around and feel like you are on a small island village rather then a big city. Even the noise of the traffic finds it difficult to make its way through the winding streets and stairways. There are other similar areas, though not as extensive, at the base of Lykavettos and in Galatsi though old houses are few and far between, most having been torn down and replaced with apartment buildings in the sixties and seventies when Athens was growing at a maddening pace. Even in dense apartment-filled neighborhoods you can still come across an occasional house that is a hundred years old or more and looks like something you might find on an island. ...... (follow the instructions below for accessing the rest of this article).
This article is featured in the app "GPSmyCity: Walks in 1K+ Cities" on iTunes App Store and Google Play. You can download the app to your mobile device to read the article offline and create a self-guided walking tour to visit the attractions featured in this article. The app turns your mobile device into a personal tour guide and it works offline, so no data plan is needed when traveling abroad.