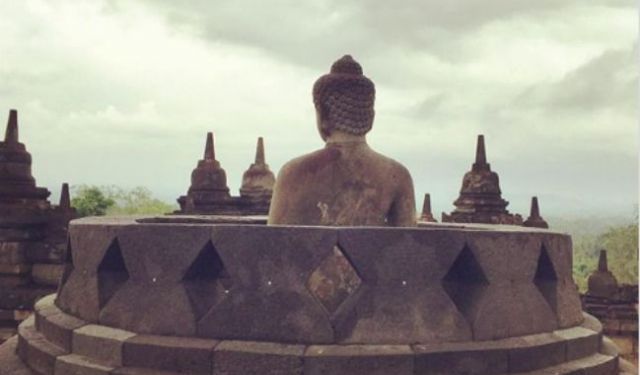 I just returned from a whirlwind trip to Indonesia. It was my first time to Southeast Asia and I wasn't sure what to expect. My interest in Indonesia started when I saw photos of Borobudur. It looked as grandiose as Bagan or Angkor Wat, although I had never met anyone who had actually been there. It looked so exotic - the largest Buddhist temple in the middle of a jungle landscape filled with volcanoes. Where else in the world can you experience something like that? When I saw a travel deal to go during the less touristy "rainy season", I knew I had to jump on it.

In this tour we visit central Java in the city of Yogyakarta (often called “Jogja”) to see Borobudur and Prambanan, two UNESCO World Heritage Sites. We saw all this on a day trip from Bali with Bali Agung Tours.

When we landed in Jogja, it was clear that we were in an entirely different place than Bali. Same country, yet so different. First off, the airport had a mix of Western and Asian toilets, which if you haven't seen before, they are basically porcelain holes in the ground. When I exited the airport, I saw motor scooters buzzing about the streets, one of which was carrying a pack of raw chickens hanging off the bike. The call to prayer echoed throughout the streets at different times in the day. Welcome to Java! ...... (follow the instructions below for accessing the rest of this article).
This article is featured in the app "GPSmyCity: Walks in 1K+ Cities" on iTunes App Store and Google Play. You can download the app to your mobile device to read the article offline and create a self-guided walking tour to visit the attractions featured in this article. The app turns your mobile device into a personal tour guide and it works offline, so no data plan is needed when traveling abroad.