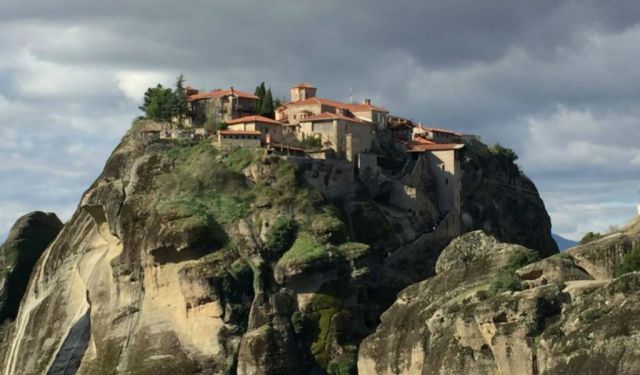 ﻿Kalambaka (Meteora) – a Hidden Gem in Greece, Kalabaka, Greece (B)

Talking about Greece, most people will think of the spectacular islands such as Santorini, Mykonos etc or the popular Acropolis in Athens but Greece has more than just islands & Acropolis, if you have time in Greece, please sure to spend a night at these wonderful place – Kalambaka aka Meteora.

The Metéora which also refers to as the unique rock formation, literally means ‘middle of the sky’, ‘suspended in the air’ or ‘in the heavens above’ in Greek — etymologically related to meteorology is one of the most spectacular and unique rock formations in the world.

Meteora is also included on the UNESCO World Heritage list and it’s definitely something that you will never be able to see else where in the world but in Greece.

The easiest and convenient way is via train. It’s not that difficult to book your train ticket in advance via the website Trainose as English is available. The train ride is about 5 hours but according to the local in Kalambaka, the train often arrives in Kalambaka late. ...... (follow the instructions below for accessing the rest of this article).
This article is featured in the app "GPSmyCity: Walks in 1K+ Cities" on iTunes App Store and Google Play. You can download the app to your mobile device to read the article offline and create a self-guided walking tour to visit the attractions featured in this article. The app turns your mobile device into a personal tour guide and it works offline, so no data plan is needed when traveling abroad.