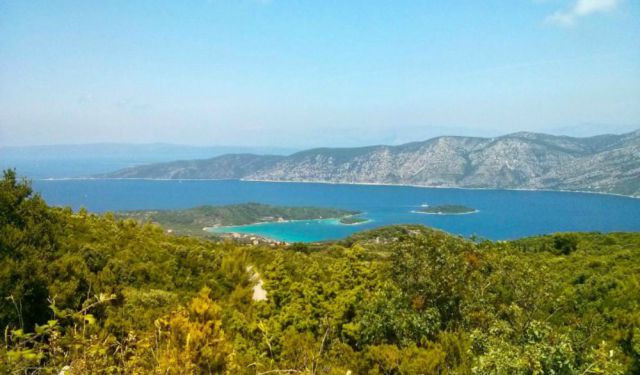 Korčula is an island gem in the Adriatic sea off the Dalmatian coast of Croatia, about half way between Split and Dubrovnik.

Known for all kinds of things like sword dancing, folk music, art and…Marco Polo; Korčula is becoming a popular destination for island hopping tourists. More recently the island has been receiving nationwide recognition for its outstanding olives and grapes, both of which we sampled in abundance.

We were there to escape the city for four days of relaxing, swimming, lounging, eating, drinking and exploring via scooter.

Korčula is not connected to the mainland by land or bridge, so to reach the island you must arrive by ferry. We caught a ride with Jadrolinija Ferries from Split to Korčula via Hvar for €17.50 (130kn) each, one way. Check the website for timings as additional services run during the peak season, I think our ferry departed at 12:00 and took about three hours. You can book tickets online through the website, or get them in person at the local ticket office as we did. ...... (follow the instructions below for accessing the rest of this article).
This article is featured in the app "GPSmyCity: Walks in 1K+ Cities" on iTunes App Store and Google Play. You can download the app to your mobile device to read the article offline and create a self-guided walking tour to visit the attractions featured in this article. The app turns your mobile device into a personal tour guide and it works offline, so no data plan is needed when traveling abroad.