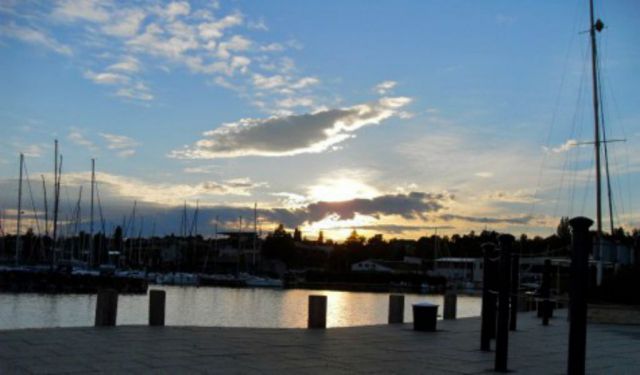 Situated in the south west of Hungary, Lake Balaton is the largest lake in central Europe and is well known for it’s history and it’s wine; two big ticks for us. The north side of the lake has the old resorts that have become less populated and more relaxed over the years, catering to an older crowd looking for a relaxing holiday walking in nature and laying about on vineyards. The south side is where the new resorts are, think teenagers, nightclubs and party boats.

Typically, we chose a town on the north side called Balatonfüred; usually the busiest town on this side, but at this time of year (1st of June) the high season was still a couple of weeks away so it was blissfully sleepy. Cue days of wine, food, caves, views, swims and more wine.

Note – Pricing will be in pounds sterling, as trying to count in Hungarian Forints is ridiculous. In the cost summary I will provide the current (2016 pre-brexit) exchange rate.

Flights to Budapest from London start from £37 one way flying Ryan Air, however at the time we used Wizz Air; departing from Luton for £76 return each. For those who want to land closer, there’s also an airport at Lake Balaton itself; Hévíz–Balaton Airport, but it’s seasonal and only connects with a few European cities. ...... (follow the instructions below for accessing the rest of this article).
This article is featured in the app "GPSmyCity: Walks in 1K+ Cities" on iTunes App Store and Google Play. You can download the app to your mobile device to read the article offline and create a self-guided walking tour to visit the attractions featured in this article. The app turns your mobile device into a personal tour guide and it works offline, so no data plan is needed when traveling abroad.