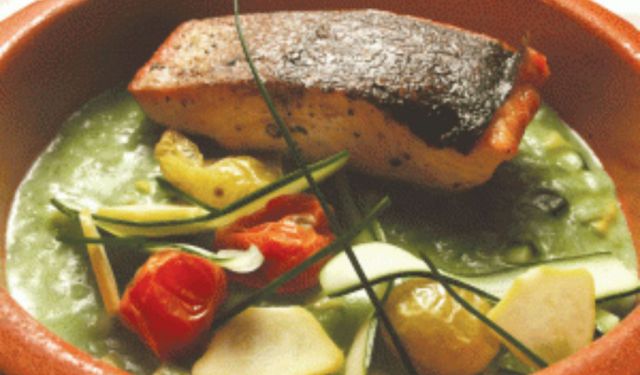 Little Next Door Has Soul, Los Angeles, California (B)

A tall gentleman walked into Little Next Door on a Tuesday night with sunglasses and a chic scarf tied around his neck. At first I thought he was the talented actor Liam Neeson with long hair. When he took off his sunglasses, I realized this very handsome French man with an air about him was Nicolas Meschin, one of the owners of The Little Door and Little Next Door.

He sat next to me throughout my dinner with a group of foodies and shared some interesting facts about the rise of The Little Door and what new at Little Next Door.

Growing up in France near Cognac, Meschin fondly remembers his mother cooking in the house every day. He enjoyed hanging out in the kitchen, talking with his family and tasting from the pots while his mother added ingredients. “The Kitchen was the center and soul of my house,” Meschin said. “Today there isn’t as much communion in many kitchens with both parents working and busy schedules.”

In his 20’s Meschin followed his brother Frederic to Los Angeles and worked along 3rd Street in a Paris/Mexico Cafe. “We made French dishes and rolled them into a tortilla for a burrito,” Meschin said. ...... (follow the instructions below for accessing the rest of this article).
This article is featured in the app "GPSmyCity: Walks in 1K+ Cities" on iTunes App Store and Google Play. You can download the app to your mobile device to read the article offline and create a self-guided walking tour to visit the attractions featured in this article. The app turns your mobile device into a personal tour guide and it works offline, so no data plan is needed when traveling abroad.