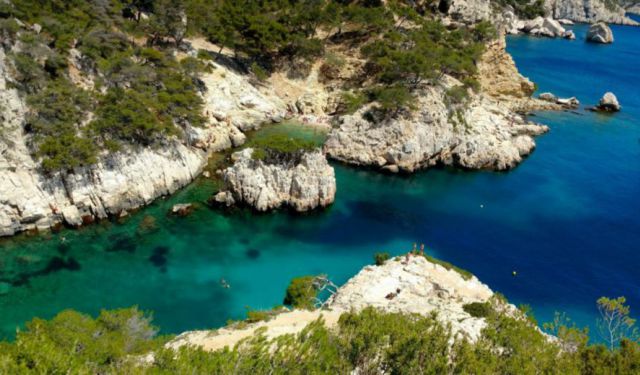 On the south coast of France there’s a city full of rockers and pirates. It’s a multi-cultural melting pot called Marseille and it’s easily one of the most bad-ass cities in Europe.

France’s second largest city was one of the most important ports of the ancient world, linking various Greek, Roman and Gallic empires with northern Africa. It’s this commerce that has made Marseille the diverse and unique city is is today. Many people in Marseille proudly consider themselves separate from the rest of France, and apparently the feeling is mutual.

We had three nights in the city to see what all the fuss is about, and we had a blast. It’s a wild, exciting city with one of the most beautiful areas of the continent at its doorstep.

We arrived to Marseille from Castellane using bus and rideshare. The Castellane to Digne-les-Bains bus departs at 09:30 on Sundays, costs €7.90 each and takes one hour. From Digne-les-Bains to Marseille we booked a ride-share in advance using BlaBlaCar. Our ride took 1.5 hours, cost €9.90 each, and we were delivered directly to our accommodation, which is often the case when getting a ride with a local. ...... (follow the instructions below for accessing the rest of this article).
This article is featured in the app "GPSmyCity: Walks in 1K+ Cities" on iTunes App Store and Google Play. You can download the app to your mobile device to read the article offline and create a self-guided walking tour to visit the attractions featured in this article. The app turns your mobile device into a personal tour guide and it works offline, so no data plan is needed when traveling abroad.