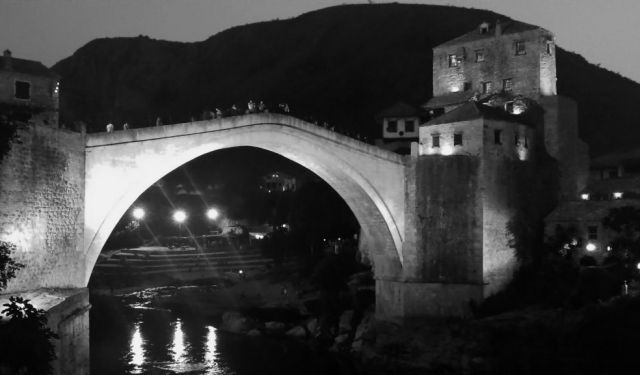 Mostar in a Day, Mostar, Bosnia-Herzegovina (B)

We’re up early (why do I keep doing this when I’m on holiday, I’m supposed to be more lazy than normal), and we head off into the old town. I’ve been reliably informed that the view from the top of the Mehmed Pasha Mosque is spectacular and gives the best view of Mostar. Tickets are 10 marks to go up the minaret but trust me, it is worth it. Just be warned it is very narrow both on the stairs and at the top. We ended up chasing a lovely Danish couple around the viewing platform because there was no space to squeeze past.

The Neretva River runs by the base of the cliff and the Mostar bridge looks resplendent in the morning sunshine. The original was completed in 1566 under orders (and the threat of death) from Suleiman the Magnificent and built under the watchful gaze of Mimar Hayruddin (the apprentice of the famous Mimar Sinan who designed the Sultan Ahmed Mosque in Istanbul and the Taj Mahal in Agra). At the time it was the largest man-made arch in the world and the story goes that he was so worried that he had organised his own funeral for the day that the bridge was opened. ...... (follow the instructions below for accessing the rest of this article).
This article is featured in the app "GPSmyCity: Walks in 1K+ Cities" on iTunes App Store and Google Play. You can download the app to your mobile device to read the article offline and create a self-guided walking tour to visit the attractions featured in this article. The app turns your mobile device into a personal tour guide and it works offline, so no data plan is needed when traveling abroad.