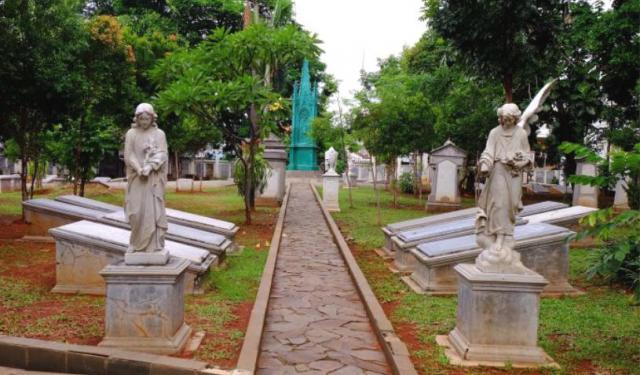 Museum Taman Prasasti or Inscription Museum, formerly known as Kebon Jahe Kober, was the first modern public cemetery in the world built in 1795 in Tanah Abang district, Central Jakarta, Indonesia. The land belonged to Halventinus van Riemsdijk, a landlord and a businessman, before he inherited it to the Dutch colonial government.

It provided a new burial site to replace that in Hollandsche Nieuw Kerk (Dutch New Church), now Museum Wayang or Wayang Puppet Museum, since the cemetery was already full. The cemetery area was once 5.5 hectares, but now it’s only 1.5 hectares left due to the city expansion.

But nothing eerie and haunted about this place. The cemetery operated until 1974 and closed a year later. Before turning into a museum on July 9, 1977, the remaining bodies were brought back to their families and some others are cremated. In other words, no bodies under the tombstones ever since. ...... (follow the instructions below for accessing the rest of this article).
This article is featured in the app "GPSmyCity: Walks in 1K+ Cities" on iTunes App Store and Google Play. You can download the app to your mobile device to read the article offline and create a self-guided walking tour to visit the attractions featured in this article. The app turns your mobile device into a personal tour guide and it works offline, so no data plan is needed when traveling abroad.