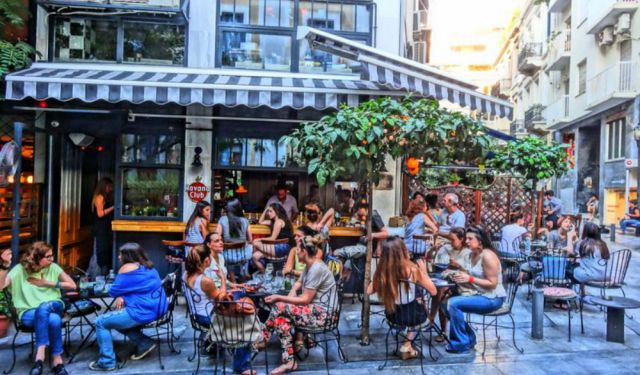 Between Syntagma Square and the Plaka are two streets that host some of the most interesting new businesses in the city as well as some older businesses that have managed to hang on through the hard times. Nikis Street and Voulis Street run parallel to each other starting a block below Syntagma Square and intersecting Ermou Street, Athens main shopping street. In the old days Nikis Street was one of the centers of Greece's tourist industry with small travel agencies, ferry ticket offices and the famous Delphi Restaurant which was one of the most popular old restaurants in Athens. Eleftherodakis Books was on Nikis Street as well as Compendium Books which were the largest English language book shops in Athens. A small alley off Nikis was the home of Mr Jung's Chinese, the first Chinese restaurant in Athens. Mazarakis Flokati Shop on Voulis was a gathering place for American X-pats who would come in to play backgammon and catch up on the news from host Tom Mazarakis. Later he and his brother Steve opened the first pizza-by-the-slice restaurant next door. Across the street was one of the first Internet Cafes in Athens, at a time when few in Greece knew what the internet was. Apollonos Street, which connects Voulis and Nikis had the first sushi restaurant which had moved there from the big beautiful mansion on Kydathineon where it began. Quantas Airways had their shop on the corner of Nikis and Metropolis in the days when people used to go to a ticket office to buy airline tickets. There were even a couple 'guest houses' where you could get a dormitory bed or sleep on the roof for about a dollar. (I'm thinking less but does that even seem possible these days?) ...... (follow the instructions below for accessing the rest of this article).
This article is featured in the app "GPSmyCity: Walks in 1K+ Cities" on iTunes App Store and Google Play. You can download the app to your mobile device to read the article offline and create a self-guided walking tour to visit the attractions featured in this article. The app turns your mobile device into a personal tour guide and it works offline, so no data plan is needed when traveling abroad.