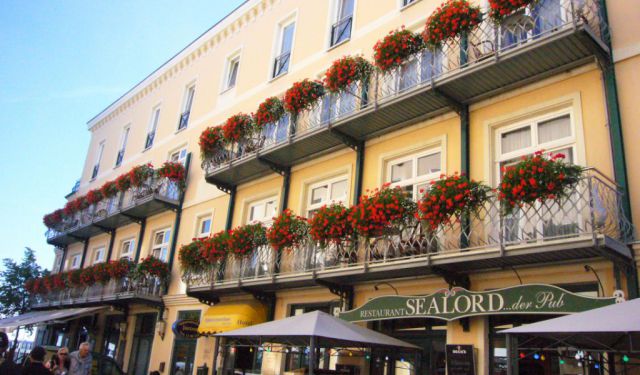 Off the Beaten Path City Hopping Near Berlin Part I: Warnemu, Rostock, Germany (B)

I don’t know about you, but I feel excited and curious about cities or towns I haven’t heard of. On a Princess Cruise trip to Baltic Sea, passengers are always informed about the next destination on a daily newsletter. I was familiar with all the cities mentioned in the itinerary, except Warnemünde. I purposely didn’t search any information about it, hoping that it would be a pleasant surprise.

When the ship docked for 8 hours at the port, so-called Pier 7, in Warnemünde, there were quite a lot of passengers prefer to go to Berlin, instead of exploring the city right before their eyes, by taking a bus tour to Berlin offered by Princess Cruise itself.

In my point of view, it’s just not a very wise choice, especially the journey from Warnemünde to Berlin and back takes nearly 6 hours by bus. It means they only had 2 hours to explore the city. Although I believe the bus tour has a very well-planned itinerary that they won’t miss major landmarks in limited time, Berlin is such a very nice city that deserves more than 2 days to visit. ...... (follow the instructions below for accessing the rest of this article).
This article is featured in the app "GPSmyCity: Walks in 1K+ Cities" on iTunes App Store and Google Play. You can download the app to your mobile device to read the article offline and create a self-guided walking tour to visit the attractions featured in this article. The app turns your mobile device into a personal tour guide and it works offline, so no data plan is needed when traveling abroad.