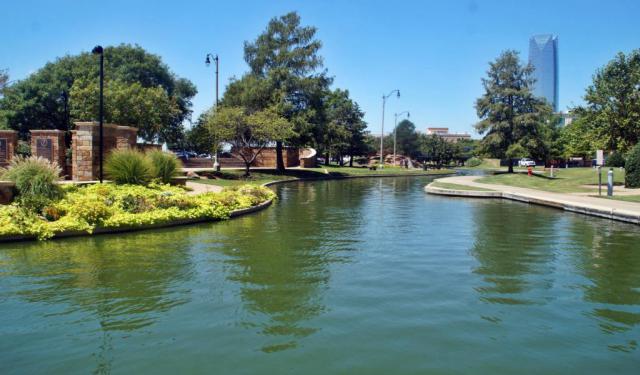 At 8 AM, we woke up after a good night’s sleep in the car at Amarillo Travel Information Center. Ahead of us was a short day with only four hours of driving and a few stops along the historical Route 66 before getting to Oklahoma City.

It soon became evident that we had officially entered the Bible Belt area of southeastern and south-central USA, as we saw several large crosses on the highway.

We first drove to the tiny village of Mclean, where we saw the oldest gas station in Texas, a vintage Phillips 66 station, which was built in 1927 in Tudor Revival style. The gas station is very tiny and extremely cute! It has been closed since 1977, but is still a popular stop for Route 66 travellers.

There wasn’t much Route 66 to be followed on the next stretch, so most of the driving was on Highway 40. It wasn’t until we crossed into the state of Oklahoma, that we got back on the original route.

We were headed to Oklahoma City, the state capital of Oklahoma, where my friend Alexandria lives with her husband and dog. I met Alexandria last year in April, on top of Mt Hallasan on Jeju Island. We bonded as we climbed down the mountain together, and Alex invited me to Oklahoma, which I of course couldn’t say no to! ...... (follow the instructions below for accessing the rest of this article).
This article is featured in the app "GPSmyCity: Walks in 1K+ Cities" on iTunes App Store and Google Play. You can download the app to your mobile device to read the article offline and create a self-guided walking tour to visit the attractions featured in this article. The app turns your mobile device into a personal tour guide and it works offline, so no data plan is needed when traveling abroad.