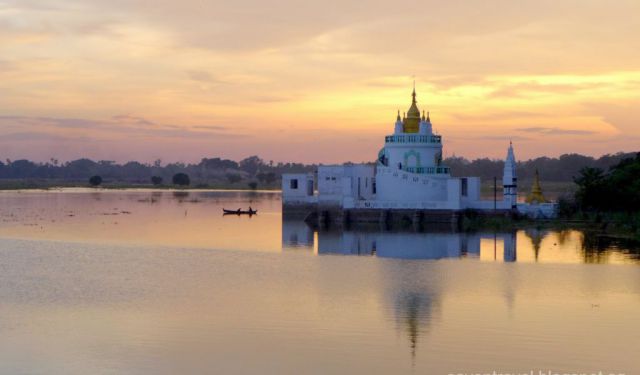 Mandalay is the second-largest city and the last royal capital of Burma. The city gets its name from the nearby Mandalay Hill. The root word has been speculated to be: "Mandala" (meaning, circular plains), "Mandare" (believed to mean "auspicious land"), or "Mandara" (a mountain from Hindu mythology).

As we arrive Mandalay, first thing I notice was the topography, see the vast plane, infinite land mass!

It was an ideal vehicle for those photography enthusiast, specially in this region which has several interesting scenery along the way.

After our sumptuous lunch (click here for details), our first destination was Mingun, we drove for a little more than an hour, along Sagaing Hills, passing by a very interesting rural village scenery. Worthy to be highlighted are the following:

The pagodas and monasteries crowd the numerous hills along the ridge running parallel to the river.

The common village people, market sellers, kids playing traditional toys, adults wearing their traditional clothes, ...... (follow the instructions below for accessing the rest of this article).
This article is featured in the app "GPSmyCity: Walks in 1K+ Cities" on iTunes App Store and Google Play. You can download the app to your mobile device to read the article offline and create a self-guided walking tour to visit the attractions featured in this article. The app turns your mobile device into a personal tour guide and it works offline, so no data plan is needed when traveling abroad.