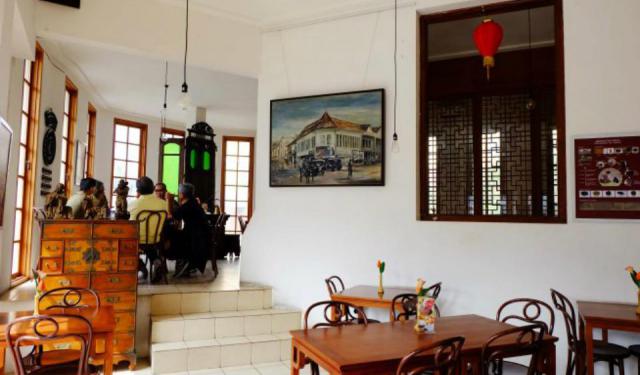 Pantjoran Tea House: The Taste of Heritage in Jakarta, Jakarta, Indonesia (B)

Pantjoran Tea House is situated in Glodok area, Jakarta, the biggest Pecinan or Chinatown in Indonesia that has been existing since 380 years ago. Jalan Pancoran is part of Glodok area coverage, apart from Gang Gloria (Gloria Alley) and Petak Sembilan. The two-storey building is also the main gate to Jakarta Old Town, formerly called Batavia, from the south.

The name “Glodok” is inspired by “grojok grojok”, the sound of running water from the douche in the yard of the City Hall. Nonetheless, Chinese people pronounced it as “glodok”, that finally becomes an official name of the area. On the other hand, the translation of “douche”, which is pancuran in Indonesian, inspires Pancoran (local’s unofficial pronunciation of pancuran) as a street name.

Operating since nearly 3 years ago, Pantjoran Tea House is definitely not the oldest tea house and restaurant in Jakarta. Nonetheless, the age of the building is much older than the tea house itself because it used to be Apotheek Chung Hwa (Chung Hwa Pharmacy), the second oldest pharmacy in Jakarta opened in 1928. ...... (follow the instructions below for accessing the rest of this article).
This article is featured in the app "GPSmyCity: Walks in 1K+ Cities" on iTunes App Store and Google Play. You can download the app to your mobile device to read the article offline and create a self-guided walking tour to visit the attractions featured in this article. The app turns your mobile device into a personal tour guide and it works offline, so no data plan is needed when traveling abroad.