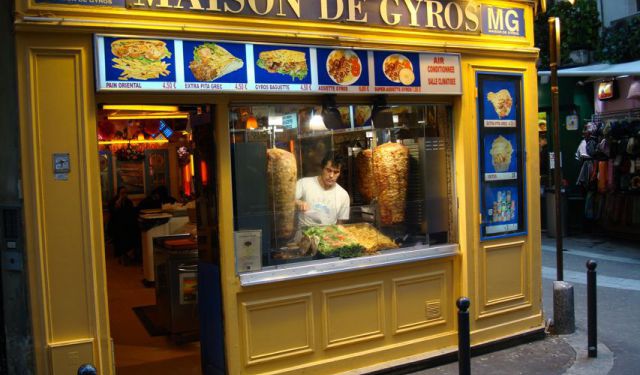 One of my observations was that Paris had more restaurants than shops. I don't know if this is true or not but it seems to me that the Parisians found more pleasure in eating then they did in buying stuff and in my opinion this is a very healthy attitude and made me convinced that Paris was my kind of city, maybe as much as Athens is.

I am not an expert on French Cuisine but I know what I like and in Paris I liked almost everything I ate. If you have never been to Paris or have not been there enough to really know about French food I recommend to find a website about it and study it and write down the names of the things you think you might like to try because you may find yourself in a restaurant where the menu is only in French, which can be the case in many of the best restaurants. You may find an accommodating waiter who will translate one or two things on the menu for you but it is unlikely he will go line by line until you pick something. Some of the guidebooks will have a section on French food and what to order and if they don't they should but it depends on the size of the book. The popular pocket guides that are easy to carry around usually don't have a lot of space to go into detail besides giving you a general overview and recommending a few restaurants. So just as you would take a course on European Art and History before going to Paris, spend some time studying the food. Our first night we ate at a small Bistro called Le Lutin dans le Javulin (photo) on rue Git-le-Coeur, a tiny street that runs between Rue Andre-des-Arts and the river, about a block from the giant statue of St Michel killing the dragon at Place de St Michel. There was one other couple there and the young waiter had plenty of time to explain what everything was in English. It was a very nice dinner for a first night in Paris and the fact that my daughter refused to leave the hotel with us made it easier to fumble along, making mistakes in French, without her criticizing us. ...... (follow the instructions below for accessing the rest of this article).
This article is featured in the app "GPSmyCity: Walks in 1K+ Cities" on iTunes App Store and Google Play. You can download the app to your mobile device to read the article offline and create a self-guided walking tour to visit the attractions featured in this article. The app turns your mobile device into a personal tour guide and it works offline, so no data plan is needed when traveling abroad.