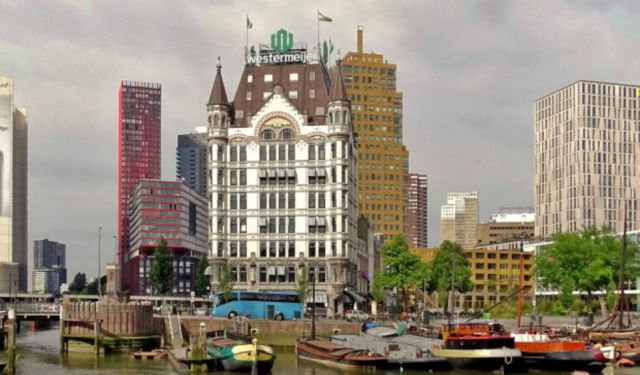 Rotterdam is the second-largest municipality in the Netherlands, and in so many ways it’s the exact opposite of Amsterdam, which is the largest. Where Amsterdam is old and historic, Rotterdam is new, modern and oftentimes, a little quirky.

It was the perfect stopover between Ghent and Amsterdam, and one we’d definitely recommend to anyone interested in design or architecture.

Getting between Belgium and the Netherlands really couldn’t be easier as there are many options: bus, train, car, bike… As we were departing from Ghent, we opted for the train, which required a transfer in Antwerp.

The first leg of the journey was quite simple and straight forward (except for the whole getting off at the right station thing, which you can read about here). We simply hoped on the intercity train from Ghent, and less than an hour later we were in Antwerp.

From Antwerp to Rotterdam, via train, there are two options: the high-speed Thalys train, which will get you there in just over 30 minutes, or the slower intercity train, which will take an hour and 10 minutes. If you’re organised and can book your tickets well in advance, the price difference between the two is almost negligible; in that case, it makes sense to opt for the Thalys. ...... (follow the instructions below for accessing the rest of this article).
This article is featured in the app "GPSmyCity: Walks in 1K+ Cities" on iTunes App Store and Google Play. You can download the app to your mobile device to read the article offline and create a self-guided walking tour to visit the attractions featured in this article. The app turns your mobile device into a personal tour guide and it works offline, so no data plan is needed when traveling abroad.