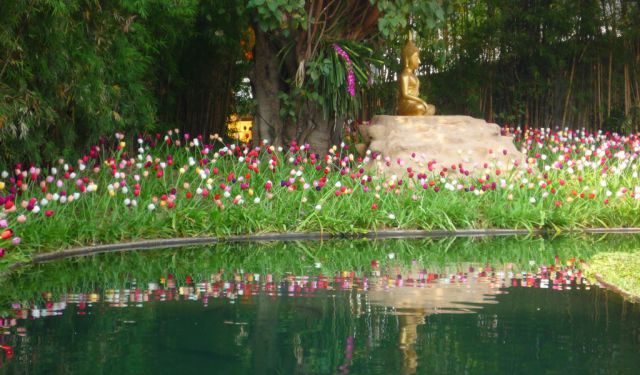 In February, we undertook our first ‘proper’ family holiday to Thailand. We spent 4 days in Chiang Mai, a city in the north of Thailand, and 3 days on the beach in Phuket, which is an island in the south. There’s not much for me to say about Phuket, we stayed in a nice apartment and spent the whole time in the pool or by the beach! But I thought I’d tell you about Chiang Mai.

Chiang Mai is a really nice city to visit. It doesn’t really feel like a city because the areas you are likely to visit or stay in are in general low rise and fairly quiet. The old city centre is enclosed by a square moat and seems to be mostly made up of temples! (I am joking, but there are a seriously large number of temples). We stayed a little way outside the city centre in an area called Nimmanhaemin. We chose to stay here simply because it was cheaper than staying in the city centre but closer to it than some hotels which seemed to be outside of Chiang Mai itself. However, we seriously lucked out! The area is full of restaurants and coffee shops and has a really laid back, trendy feel. It was perfect for us because we never had to venture far to find food (which is a blessing when you have small children). Also, there were loads of red taxis (which looked to me like pick-up trucks with a roof put on the back) so when we did want to visit the city centre we could easily do so and it only took 10-15 minutes. ...... (follow the instructions below for accessing the rest of this article).
This article is featured in the app "GPSmyCity: Walks in 1K+ Cities" on iTunes App Store and Google Play. You can download the app to your mobile device to read the article offline and create a self-guided walking tour to visit the attractions featured in this article. The app turns your mobile device into a personal tour guide and it works offline, so no data plan is needed when traveling abroad.