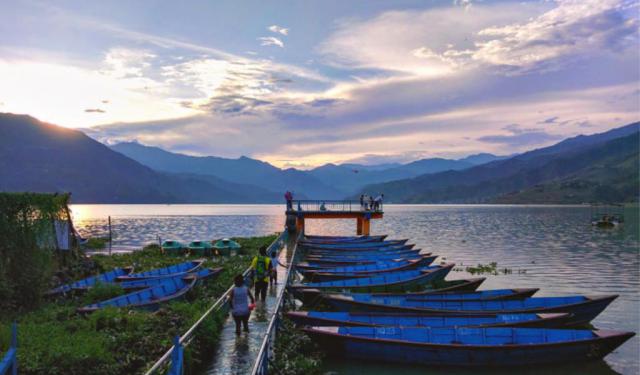 Pokhara, A Great Place to Relax Around Nature, Pokhara, Nepal (B)

Nepalese believe that Pokhara, a valley that offers close-up views of some of the most beautiful mountains on Earth, is “Heaven on Earth” . The name “Pokhara” comes from a Nepali word, “Pokhari” which means pond. Aptly so because the city is famous for various lakes in the region, the most popular being Fewa lake right in the city. Pokhara has long held reputation of being one of the most beautiful cities in Nepal, and for me, this holds true. Not necessarily for the city itself, but for the incredible nature that surrounds this picturesque valley.

Two-hundred kilometers west of Nepal’s capital Kathmandu, Pokhara attracts many domestic as well as international tourists every year, most lured by the closeness of beautiful nature in the city. I’ve always found it to be in stark contrast of Kathmandu, as the latter being the capital is overcrowded and utterly chaotic. Pokhara is also the start point for the world-famous Annapurna circuit trek, that takes you close to some magnificent Himalayan mountains including Annapurna, Gangapurna, Fishtail and Dhaulagiri. ...... (follow the instructions below for accessing the rest of this article).
This article is featured in the app "GPSmyCity: Walks in 1K+ Cities" on iTunes App Store and Google Play. You can download the app to your mobile device to read the article offline and create a self-guided walking tour to visit the attractions featured in this article. The app turns your mobile device into a personal tour guide and it works offline, so no data plan is needed when traveling abroad.