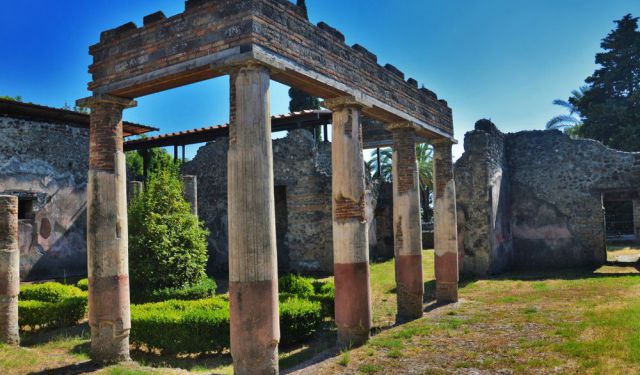 Pompei is one of the most famous archaeological sites in the world. It's been featured in numerous Hollywood productions and is a symbol of the sophisticated life in ancient Rome. The tragic fate following the eruption of Mt. Vesuvius in 79 AD made this beautiful seaside town cease to exist overnight. The ashes of the volcano sealed and protected the streets with houses of Pompei from invaders and atmospheric conditions for centuries to come. Excaveted as late as in the 18th century, the perfectly well preserved statues, frescoes, shops and streets have revealed how advanced the ancient Romans were. Pompei became a literal time capsule.

The closest city from Pompei is Naples, but if you have a free couple of days, it's very easy and quick to visit the site also from Rome. There are many trains between Rome and Naples, they are not too expensive and the journey takes only around 2 hours 30 minutes.

From the main train station in Naples, you need to use the Circumvesuviana city trains. Make sure that you take the train which goes to Sorrento and get off at the station Pompei Scavi. There is another station called just Pompei - it is the modern town - don't get off there. It is located 2 stations after Pompei Scavi, however, it's on a different line - Poggiomarino. So make sure your train destination is Sorrento, not Poggiomarino. ...... (follow the instructions below for accessing the rest of this article).
This article is featured in the app "GPSmyCity: Walks in 1K+ Cities" on iTunes App Store and Google Play. You can download the app to your mobile device to read the article offline and create a self-guided walking tour to visit the attractions featured in this article. The app turns your mobile device into a personal tour guide and it works offline, so no data plan is needed when traveling abroad.