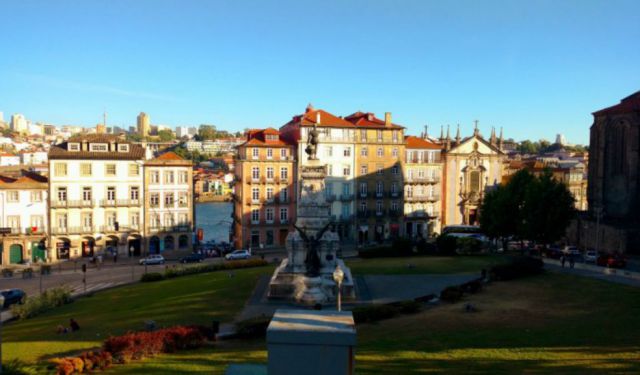 Naming a city after a wine sounds like a great idea to me, but as it turns out Porto was actually named due to its importance as a trade port on the Iberian peninsular and Douro river, which extends into Spain. Portugal’s ‘second city’ has become internationally renowned for the fortified wine produced on the banks of the Douro, and throughout most of the world (looking at you USA) only fortified wine from this region can boast the name Port.

Porto is the younger, quieter, more traditional sibling to Lisbon. Lisbon is the party-girl older sister, emotions on her sleeve, dancing into the early hours, drinking gin with a large and trendy social circle. Porto is the reserved younger brother, reflective, pensive, sipping port over a good book, fiercely loyal to a few close friends.

We arrived to Porto from Lisbon via bus courtesy of Rede Expressos. Tickets cost €19 each for the 3.5 hour journey and the bus departs from Sete Rios terminal near the zoo in Lisbon, which is the closest Metro stop. ...... (follow the instructions below for accessing the rest of this article).
This article is featured in the app "GPSmyCity: Walks in 1K+ Cities" on iTunes App Store and Google Play. You can download the app to your mobile device to read the article offline and create a self-guided walking tour to visit the attractions featured in this article. The app turns your mobile device into a personal tour guide and it works offline, so no data plan is needed when traveling abroad.