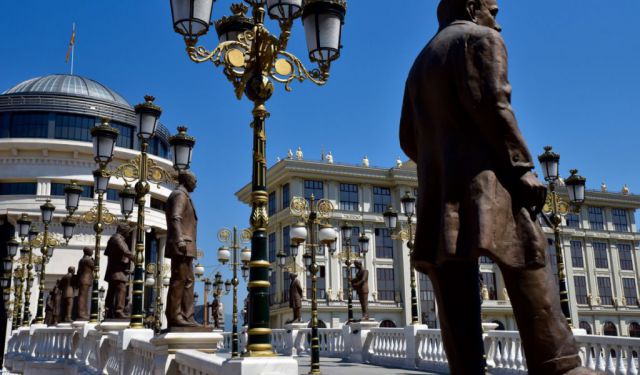 Post Communist Kitsch in the City of Statues, Skopje, Macedonia (B)

Skopje Macedonia has been undergoing a facelift. More than city beautification, Skopje is reinventing itself.

The controversial “Project 2014” has been widely criticised as an overpriced frivolous display of nationalistic kitsch, some even labelling it a mini Vegas.

New museums, government buildings, bridges and countless monuments (preferably with a water feature) laying claim to historical Macedonian figures have been constructed and erected. The aim; to give the city a more classical feel.

The number of statues is really quite mind-boggling. They are literally everywhere you look, including on the roofs of buildings. Statues and monuments are not the only over the top installations in the city.

Four replica Galleon style warships are being constructed on the Vardar River in the city. Pegged for use as cafes and restaurants, the theme park style boats, have been described as “the height of bad taste” leaving most locals outraged.

Perhaps the artificial islands in the middle of the river, home to giant potted willow trees were the tipping point for angry locals. ...... (follow the instructions below for accessing the rest of this article).
This article is featured in the app "GPSmyCity: Walks in 1K+ Cities" on iTunes App Store and Google Play. You can download the app to your mobile device to read the article offline and create a self-guided walking tour to visit the attractions featured in this article. The app turns your mobile device into a personal tour guide and it works offline, so no data plan is needed when traveling abroad.