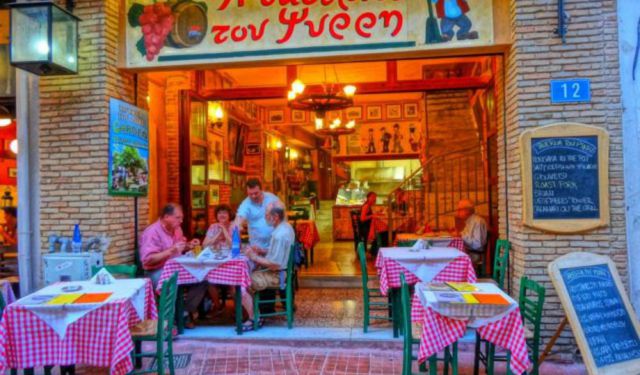 Plaka is fun for your parents but if you are of partying age Psiri along with Gazi are the places to be. Psiri does not have the carefree Never On Sunday feel that the Plaka has. It is sort of a dark place that echos its underworld past. But if you want good food and nightlife there is no area as authentically Greek as Psiri, or as international.

Psiri has always had a reputation of being anti-establishment. From the very beginning of the modern Greek State people from the provinces and especially from the island of Naxos, came to the area of Psiri. Many got jobs and became respectable citizens but some stayed and made up the underworld of Athens. They were known as mangas. Hash-smokers, petty criminals and people discontent with society their ranks were constantly replenished by new immigrants. One group called Koutsavakideswere known for their long mustaches, long sharp toed boots with high heels, tight pants, a broad sash which hid their weapons and their jackets worn with one arm out of the sleeve. They terrorized Athens using Psiri as their base for over 50 years. They literally governed the neighborhood and even the police were afraid to set foot in Psiri. Sort of like the way Exarchia is now. ...... (follow the instructions below for accessing the rest of this article).
This article is featured in the app "GPSmyCity: Walks in 1K+ Cities" on iTunes App Store and Google Play. You can download the app to your mobile device to read the article offline and create a self-guided walking tour to visit the attractions featured in this article. The app turns your mobile device into a personal tour guide and it works offline, so no data plan is needed when traveling abroad.