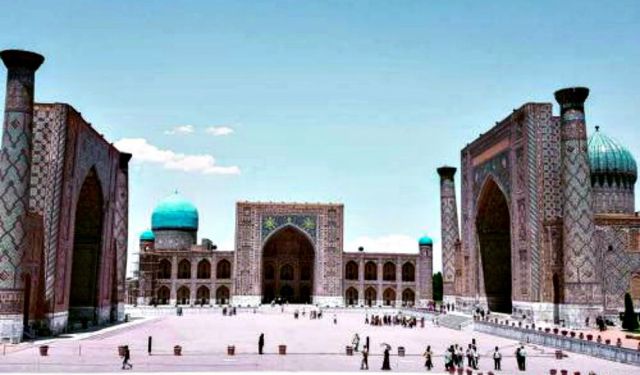 Registan Square, Samarkand: The Heart of the Silk Road, Samarkand, Uzbekistan (B)

Samarkand is often referred to as the heart of the silk road. Why? Because it was once the hub of silk trade and the halfway point of the trade route that connected Europe to Asia. The city is rich in history and the streets lined with mosaic architecture. Here is our picture diary of Registan square, Samarkand.

First up is the famous Registan square. Registan square was once a noisy and lively square filled with market stalls, where farmers and artisans sold their goods. But today, there stands 3 very notable structures; Ulughbek madrasah, Tilya-Kori madrasah and Sher-Dor madrasah.

The first building, Ulughbek madrasah dates back to 1471 and the other two were built in the 17th century to replicate Ulughbek’s fascinating design that depicts stars in the sky.

The three Islāmic buildings were ordered to be built by two different rulers at different times. Ruler Yalangtush Bahadur ordered the construction of a second madrassah (Sher-Dor) intending to mirror that of Ulughbek’s. However, after 200 years, Ulughbek’s madrasah had shrunk into the ground. Therefore, Sher-Dor stands slightly taller. ...... (follow the instructions below for accessing the rest of this article).
This article is featured in the app "GPSmyCity: Walks in 1K+ Cities" on iTunes App Store and Google Play. You can download the app to your mobile device to read the article offline and create a self-guided walking tour to visit the attractions featured in this article. The app turns your mobile device into a personal tour guide and it works offline, so no data plan is needed when traveling abroad.