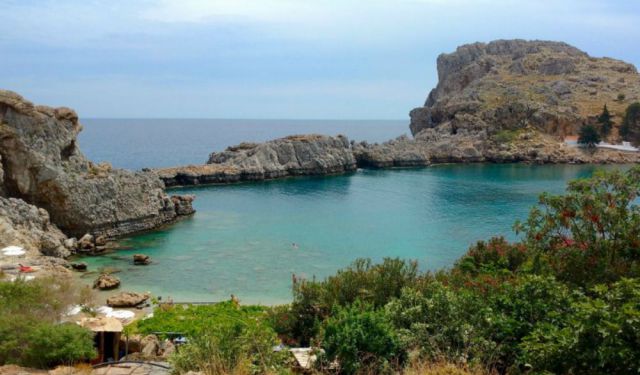 Rhodes is an island paradise in the Dodecanese, and is the fourth largest island in Greece. It sits low in the South Aegean region of the Mediterranean, 18km off the Anatolian coast of Turkey. Rhodes has been inhabited by Greeks from the 15th Century BC. BC. Just consider that for a second. It was once famous for the Colossus Of Rhodes, a huge statue of Helios that was one of the seven wonders of the ancient world (see Titan of Braavos, GOT fans).

We were on Rhodes for six nights to shed the big city life at the start of our summer Europe trip. We chose the tiny beach town of Stegna as our base, spending our days relaxing beachside, swimming and exploring the other towns on the island.

Being an island, the other option available for getting to Rhodes is ferry. There are numerous companies connecting Turkey, mainland Greece and the Greek Islands, I would recommend using Direct Ferries to plan your route, then booking through the carrier directly, as it will be cheaper. ...... (follow the instructions below for accessing the rest of this article).
This article is featured in the app "GPSmyCity: Walks in 1K+ Cities" on iTunes App Store and Google Play. You can download the app to your mobile device to read the article offline and create a self-guided walking tour to visit the attractions featured in this article. The app turns your mobile device into a personal tour guide and it works offline, so no data plan is needed when traveling abroad.