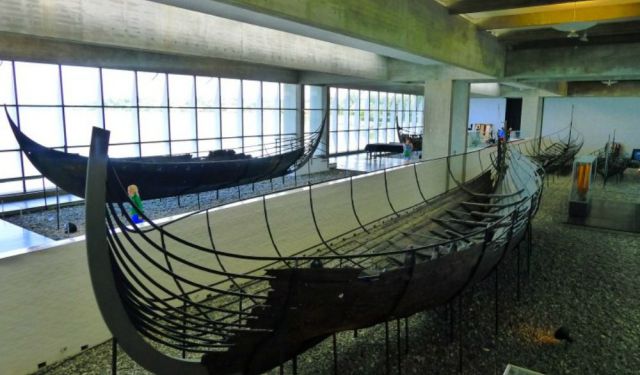 Roskilde is a pretty little town with a population of about 48,000 in West Zealand, Denmark. About 35km west of Copenhagen, it offers over 1,000 years of history, and is one of Denmark’s oldest medieval towns.

One of the main attractions to see here is the Viking Ship Museum (Vikingeskibsmuseet). The museum was built to house and preserve the remains of five 11th-Century Viking ships excavated nearby. And preserve them, they have.

The Viking Ship Hall is the oldest part of the museum. It’s also where you will find the remains of the five excavated ships. Each ship had its own purpose, and cover three major aspects of Viking life: trading, fishing, and war.

For example, this one, labelled as “Skuldelev 3” or Roar Ege was a coastal trading ship, built around 1040 AD. It was built using Danish oak and is the best preserved of the five ships on display. 75% of the hull was found intact:

The reconstructions of the five boats, including Roar Ege, can be found in the harbour. They were all built using copies of Viking Age tools and following the ancient techniques, to the best of today’s knowledge. But reconstructing these boats wasn’t all fun and games. Roar Ege alone took over 20,000 man hours to build, with 5000 spent on the ropes and hand-woven wool sail! ...... (follow the instructions below for accessing the rest of this article).
This article is featured in the app "GPSmyCity: Walks in 1K+ Cities" on iTunes App Store and Google Play. You can download the app to your mobile device to read the article offline and create a self-guided walking tour to visit the attractions featured in this article. The app turns your mobile device into a personal tour guide and it works offline, so no data plan is needed when traveling abroad.