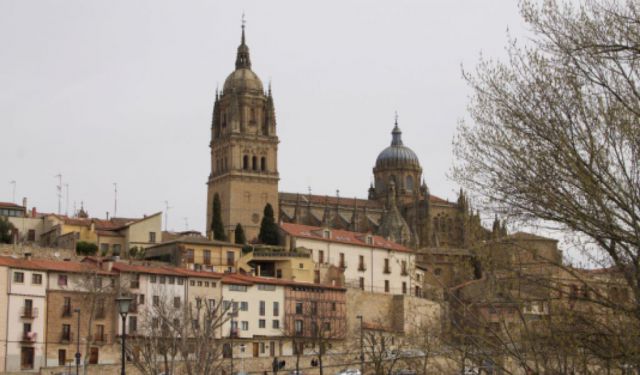 Salamanca: A Day Trip from Madrid, Salamanca, Spain (B)

Following an afternoon of exploration and adventure (and conquering that pesky fear of heights) in the Spanish town of Avila, we found ourselves back at the Renfe station and ready to board another train. However, instead of heading back to Madrid, we decided to continue west to the historic college town of Salamanca.

Salamanca is located in the Spanish province of Castilla y León some 200km west of Madrid, and just 80km east of the Portuguese border. It is one of the most important university cities in all of Spain, and is home to the University of Salamanca, which was founded in 1094 (not a typo). Each year, hundred of international students move to the city to continue their studies.

The Old City of Salamanca was declared a UNESCO World Heritage site in 1988, thanks in part to the University and other notable monuments in the surrounding area.

Just over an hour after boarding the train, we had arrived in Salamanca. After a quick Google search to situate ourselves on the map we were off! Down Paseo de la Estación we strolled, passing Parque de la Alamedilla and admiring the more modern side of Salamanca. Before we knew it and without much effort, we found ourselves at the doorstep of Plaza Mayor, the historic centre of the city. ...... (follow the instructions below for accessing the rest of this article).
This article is featured in the app "GPSmyCity: Walks in 1K+ Cities" on iTunes App Store and Google Play. You can download the app to your mobile device to read the article offline and create a self-guided walking tour to visit the attractions featured in this article. The app turns your mobile device into a personal tour guide and it works offline, so no data plan is needed when traveling abroad.