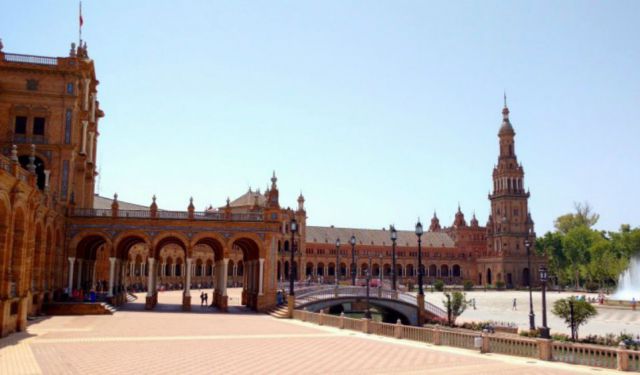 Seville is the capital of Andalucia, the largest city in southern Spain and the fourth largest in the entire county, as well as its only river port. The city flourished into one of Spain’s treasures during the 17th century, the evidence of which remains in the astounding beauty of the architecture and gardens that still draw crowds to this day. It’s also the warmest major city in Europe, with average daily highs of 36°C; Seville is hot. It’s so hot in fact, that the city all but shuts down for six hours each afternoon, resulting in a thriving night-life culture that continues until the early hours the following day.

For us Seville was a bit of an afterthought; our stepping stone from Spain into Portugal. But it shines so brightly, literally, that we left captivated by an old city carrying its tradition into the 21st century. We spent two nights in the city and it was nowhere near long enough.

We arrived to Seville via rideshare from Málaga using Blablacar. The journey took just over two hours and cost us €14.25 each. I’ve talked at length about ridesharing before, but it really is a great way to get around Spain in particular. Pick-up locations are often central or flexible, drop-offs are either central or to your door, and there’s the all-important human interaction aspect, invaluable as a traveller. For us the most convenient part about ridesharing is the departure times. If a bus isn’t leaving (or doesn’t have a cheap ticket) when you want to leave, chances are someone else will. I thoroughly recommend trying it at least once. ...... (follow the instructions below for accessing the rest of this article).
This article is featured in the app "GPSmyCity: Walks in 1K+ Cities" on iTunes App Store and Google Play. You can download the app to your mobile device to read the article offline and create a self-guided walking tour to visit the attractions featured in this article. The app turns your mobile device into a personal tour guide and it works offline, so no data plan is needed when traveling abroad.