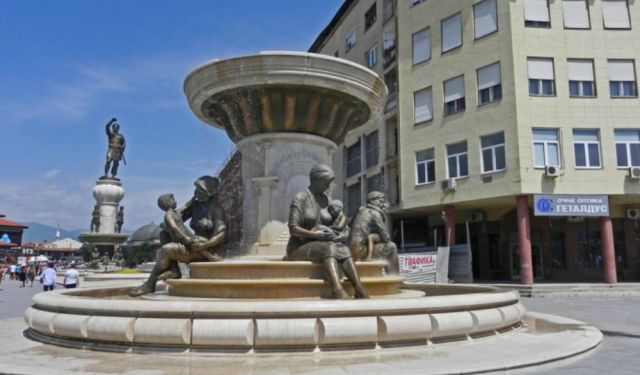 Skopje, the Capital of Contrasts, Skopje, Macedonia (B)

In all my years of travel, I’ve never seen a city that would mix old architectural elements with new ones in such a hectic manner like Skopje does. This fact was actually burned into my memory, and from the first moment we stepped out of the bus we have referred to the capital city of the Republic of Macedonia as the land of contrasts. Here’s why:

The absolute first thing that I observed were the ginormous statues dotting one of the main squares where we got off the bus. And here I was thinking that statues in Romania are large.. The one that really disturbed my eyes was a statue of Alexander the Great standing out from the crowd. Now, the truth is, I’ve read in the Bradt Guidebook before getting to the capital, and our teacher also told us of the fact that there’s somewhat of a misunderstanding regarding the country or Republic of Macedonia and the Greek region Macedonia.

The thing is, after the Republic of Macedonia gained its independence from Yugoslavia in 1991, it took the exact name of its southeastern neighbor, the Greek geographic and historic region where Alexander the Great comes from. Now, in Hungarian we can distinguish the two: we call the country Macedónia and the region Makedónia (see the difference?), as well as Alexander the Great is Makedón Nagy Sándor. But it’s a bit harder to separate it in English. ...... (follow the instructions below for accessing the rest of this article).
This article is featured in the app "GPSmyCity: Walks in 1K+ Cities" on iTunes App Store and Google Play. You can download the app to your mobile device to read the article offline and create a self-guided walking tour to visit the attractions featured in this article. The app turns your mobile device into a personal tour guide and it works offline, so no data plan is needed when traveling abroad.