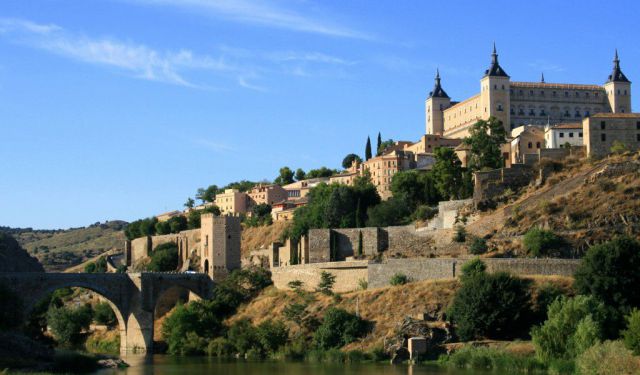 Spain: The Man from La Mancha in Toledo, Toledo, Spain (B)

Toledo’s most famous resident is a fictional one. Just 70 kilometres or half an hour by immaculate fast train from Atocha Station, Toledo is the capital of the Castile-La Mancha region. The train passes through brown fields of stubble and low hills.

A dry, seemingly monochromatic landscape through which Don Quixote travelled in the Cervantes novel. But olive groves add a dusty grey green against silver soil. White, flat-roofed farmhouses hug the ground. Ploughed fields glitter and there is the gold of ripe maize.

Sitting on its granite hill, Toledo has visible evidence of the Roman, Moorish and Spanish empires so it is no wonder Unesco bestowed World Heritage Site status on the walled city in 1986. The massive cathedral and fortress are testament to the power of medieval Spain.

The facades of Toledo’s buildings are in many shades of terracotta that become a single, sun-baked tan as the heat of the day progresses. The sort of colour that absorbs the sun and throws it back at you if you make the mistake of venturing out into an unshaded plaza in the middle of the day. ...... (follow the instructions below for accessing the rest of this article).
This article is featured in the app "GPSmyCity: Walks in 1K+ Cities" on iTunes App Store and Google Play. You can download the app to your mobile device to read the article offline and create a self-guided walking tour to visit the attractions featured in this article. The app turns your mobile device into a personal tour guide and it works offline, so no data plan is needed when traveling abroad.