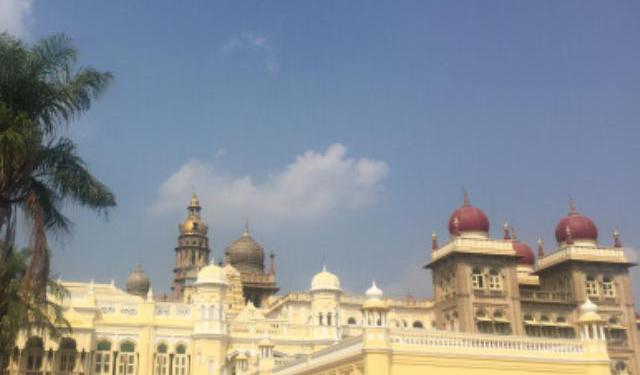 During my recent holiday in Bangalore, I chose to go on a day trip to Mysore as the city was a 3 hour drive away. However, I found out that day that what takes 3 hours on a regular day takes around 5 hours during peak season for the city. From the immense traffic that slowed us down, it looked like everyone in Bangalore was traveling on the highway to Mysore. As my driver mentioned, Mysore’s peak season seemed to be December and January.

Known by the people of Karnataka as the State Goddess, I had to visit this Durga temple with over 1000 years of history and mentioned as a sacred place in the ‘Skantha Purana’ (an ancient text) during my visit to Mysore and so made my way over to Chamundi hills first. Again as on the road, there was heavy traffic not only of vehicles going up the hill but also people on foot. After locating the ‘archana’ (individual blessing) ticket counter, I found they had two separate tickets – the regular one which meant waiting in a very long queue circling around the temple or the direct darshan, which meant skipping the regular queue and going through a separate lane to the main shrine. ...... (follow the instructions below for accessing the rest of this article).
This article is featured in the app "GPSmyCity: Walks in 1K+ Cities" on iTunes App Store and Google Play. You can download the app to your mobile device to read the article offline and create a self-guided walking tour to visit the attractions featured in this article. The app turns your mobile device into a personal tour guide and it works offline, so no data plan is needed when traveling abroad.