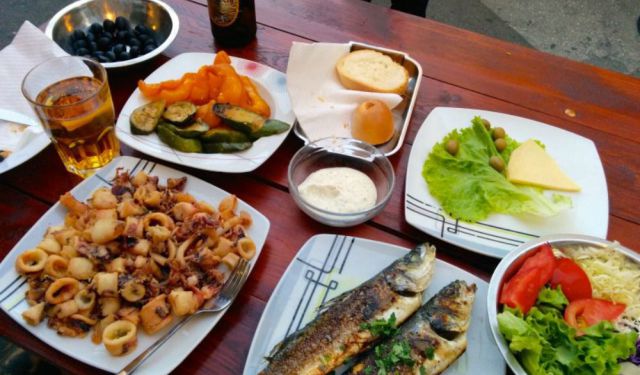 The city is somewhat unassuming at first. Arriving from the airport side offers bleak views of suburbs and housing estates, but as you get into the city centre and down to the waterfront Split is revealed as an ancient beauty, with Roman and Venetian heritage apparent in its architecture.

We were only there for one night to catch a ferry south towards island bliss in Korčula, but found it to be an exciting and interesting city where we would love to return.

We flew into Split from London Luton with Hungarian airline Wizz Air. Our flights cost €80 per person one-way, and flight time was 2.5 hours. If you book with easyjet you can get off-season seats from London, for as little as €68. ...... (follow the instructions below for accessing the rest of this article).
This article is featured in the app "GPSmyCity: Walks in 1K+ Cities" on iTunes App Store and Google Play. You can download the app to your mobile device to read the article offline and create a self-guided walking tour to visit the attractions featured in this article. The app turns your mobile device into a personal tour guide and it works offline, so no data plan is needed when traveling abroad.