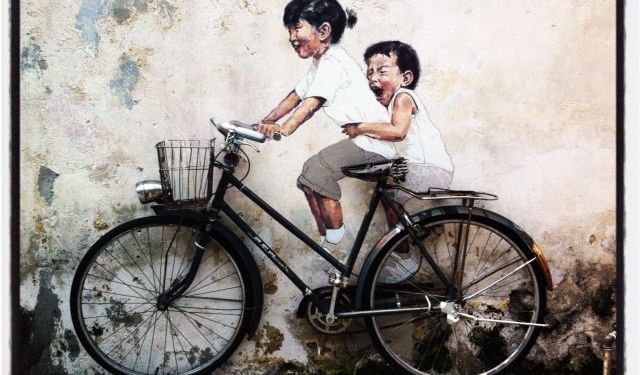 Armenian Street (Lebuh Armenia) is one of my favorite streets in Penang's heritage enclave. It's only a few blocks long, but this street seems to have something that grabs my attention almost every other house. When I add in some excellent shops, street art, and nearby restaurants, I've rounded out a couple hours of exploration. The street takes its name from the Armenians that lived in the area such as the Sarkies Brothers, developers of Singapore's famed Raffles Hotel and George Town's own Eastern & Oriental Hotel. In George Town's early days, it was called Malay Lane from the village of locals living here but was later renamed Pak Thang-ah Kay(Copper Worker's Street) by the Chinese because this is where they could buy brass- and copperwares. For the filming of Anna and the King starring Jodie Foster and Chow Yun-fat, this road stood in for a 19th-century Bangkok Street.

The most photographed place on Armenian Street is probably the Kids on Bikes Street Art by Ernest Zacharevic at the corner of Armenian and Beach Street (Lebuh Pantai). On weekends, a line stretches across the sidewalk of people waiting to take a creatively posed picture with the pair, but I always like to visit it on quiet, weekday mornings when no one is around. ...... (follow the instructions below for accessing the rest of this article).
This article is featured in the app "GPSmyCity: Walks in 1K+ Cities" on iTunes App Store and Google Play. You can download the app to your mobile device to read the article offline and create a self-guided walking tour to visit the attractions featured in this article. The app turns your mobile device into a personal tour guide and it works offline, so no data plan is needed when traveling abroad.