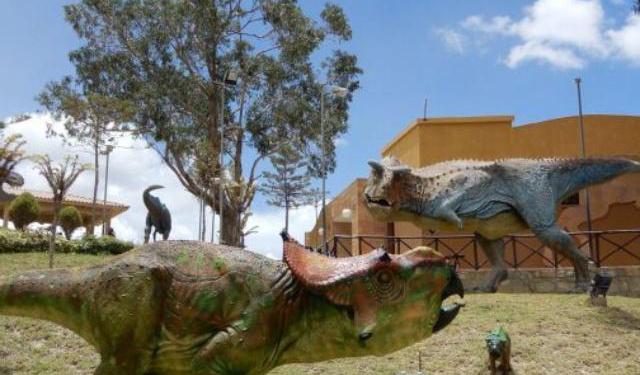 Sucre is Bolivia’s official capital and is an extremely charming city. We really enjoyed our time in Sucre, even though we were staying in the most horrible hostel ever. Sucre is also known as “La Ciudad blanca”, or the White City because of its white houses. We mainly explored the city centre and went to the “Dino Park”, or Parque Cretacico.

During our first day in Sucre, we decided to do a city walk to see all of the city’s highlights. We thought this city walk was going to take us all day, but in reality it only took us a couple of hours, since we didn’t realise most of the highlights were centred around the main square (Plaza 25 de Mayo). We walked past the Metropolitan Cathedral of Sucre, the Government and the House of Freedom where the constitution was written and the Bolivian republic was founded.

During our second day in Sucre, we went to the Parque Cretacico. Since we didn’t want to pay €180+ for a tour to Toro Toro National Park in Cochabamba, Parque Cretacico was a good alternative to see dinosaur footprints. This park is home to more than 5000 dinosaur footprints!  ...... (follow the instructions below for accessing the rest of this article).
This article is featured in the app "GPSmyCity: Walks in 1K+ Cities" on iTunes App Store and Google Play. You can download the app to your mobile device to read the article offline and create a self-guided walking tour to visit the attractions featured in this article. The app turns your mobile device into a personal tour guide and it works offline, so no data plan is needed when traveling abroad.