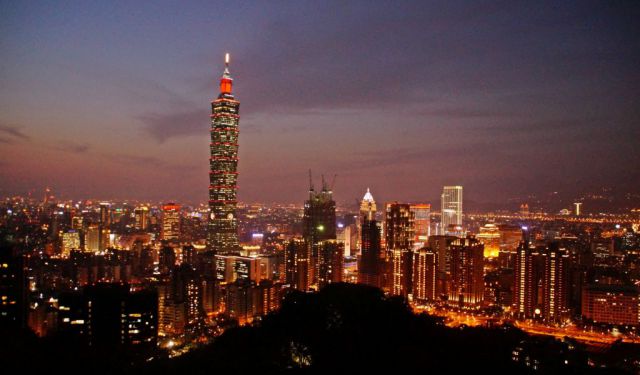 On my second day in Taipei, after exploring the city for a bit, I decided to go on an afternoon hike to the popular Elephant Mountain at 183 m., where the view of the city is said to be spectacular.

I had some trouble finding the beginning of the trail and when I eventually did, I ended up half running up the steep trail, as I only had about an hour until sunset. I soon realized that running wasn’t necessary, as the trail is quite short and easy, although very very steep and tiring with hundreds of steps to climb.

When I had reached the summit of Elephant Mountain and saw how many people had done the same, I decided to follow a trail to a nearby mountain – Muzhi Mountain at 350 m, in the hopes of finding a private spot to watch the sunset.

The trail to Muzhi Mountain starts at the summit of Elephant Mountain by going downhill a whole lot. Walking downhill wasn’t exactly what I wanted to be doing – I wanted to get UP the mountain, not down. But eventually, when I felt like I was on sea level again, the trail started going upwards. It didn’t take long for me to reach the end of the actual trail, but what I didn’t see coming was that the last bit of the way to the top was via rock climbing! There was a rope to hold onto, but since it was almost sunset and there was no one else about, it didn’t seem like the smartest thing to do. I went up a little bit of the way, but when I thought about how dangerous it would be to climb down by myself in the dark, I decided to stop and walk back to Elephant Mountain to see the rest of the sunset that had already begun. ...... (follow the instructions below for accessing the rest of this article).
This article is featured in the app "GPSmyCity: Walks in 1K+ Cities" on iTunes App Store and Google Play. You can download the app to your mobile device to read the article offline and create a self-guided walking tour to visit the attractions featured in this article. The app turns your mobile device into a personal tour guide and it works offline, so no data plan is needed when traveling abroad.