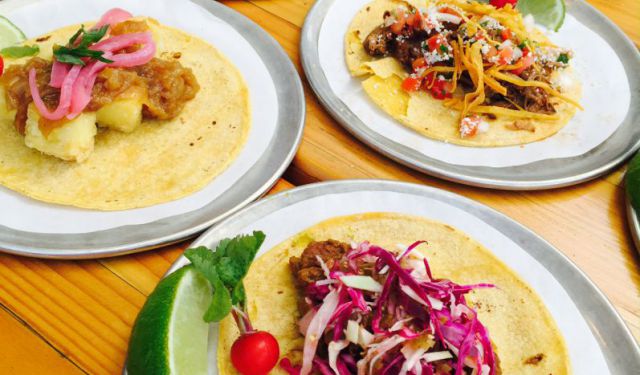 I wrote a glowing review of Danny Trejo’s newest endeavor Trejo’s Tacos, when I took my friend Taylor Carbonetti after it opened on La Brea Blvd., in April 2016. (https://dineandtravel.me/2016/04/29/terrific-trejos-tacos/). We noticed it’s revitalizing the area of La Brea Blvd. below Wilshire Blvd and the 10 freeway.

Since Carbonetti is a fan of Danny Trejo’s movies, she excitedly joined me. Unfortunetly, Trejo was filming the day we dined, yet we still had a great time eating tacos and talking to the chef and staff.

More and more brick and mortar restaurants get their start as a pop-up or food truck. The chefs work hard-driving all over Southern California to get their cuisine and name known to foodies and food truck aficionados. Once they raise enough capital, they find a location and open a store front or stand alone restaurant.

Danny Trejo and his partners in the restaurant, Jeff Georgino and Ash Shah do things differently. They opened Trejo’s Tacos on La Brea and within one day, lines of people wrapped around the corner eager to meet Danny Trejo and eat tacos, tostadas and really good gucamole. It became an overnight sensation. Soon they bought a food truck, painted it black with the Trejo’s Taco logo and started roaming the streets of So Cal as of August 30, 2016. Inside the truck is a leopard skin interior and fuzzy dice. ...... (follow the instructions below for accessing the rest of this article).
This article is featured in the app "GPSmyCity: Walks in 1K+ Cities" on iTunes App Store and Google Play. You can download the app to your mobile device to read the article offline and create a self-guided walking tour to visit the attractions featured in this article. The app turns your mobile device into a personal tour guide and it works offline, so no data plan is needed when traveling abroad.