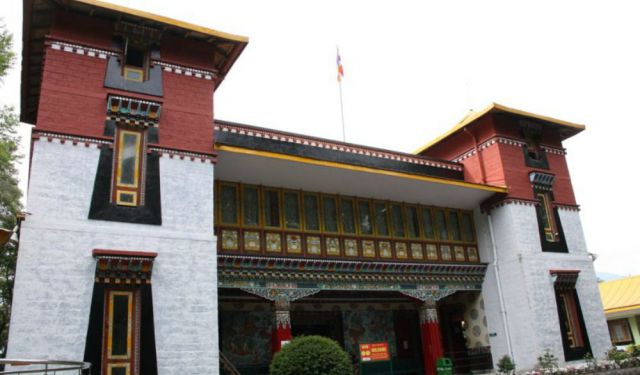 Just as you thought I had ended my series on Gangtok, Sikkim, well, I have another post in store for you. I was going through my photo archives for the past two weeks, and images of the enigmatic Himalayan mountain range inspired me to write another post about this lovely city.

When in Gangtok, your guesthouse host or local driver might mention about 3-point, 7-point or 10-point interests. The only 3-point I know is the 3-point turns when I drive! Later I learnt that the x-point interests meant the number of places (points) of interests to visit

My host suggested that I hired a driver for a day to do the “10-point interest” tour. I declined that offer because I did not like rushing from 1 point to another, without learning anything about the place or, at least, to enjoy the moment of being there. Having said that, the benefit of having a driver at my own disposal was that I got to choose the points of interest and the time spent at those places.

Rumtek Monastery is a Tibetan Buddhism monastery of the Karma Kagyu order – originally founded in Lhasa, Tibet in the 12th century by His Holiness the Gyalwa Karmapa. ...... (follow the instructions below for accessing the rest of this article).
This article is featured in the app "GPSmyCity: Walks in 1K+ Cities" on iTunes App Store and Google Play. You can download the app to your mobile device to read the article offline and create a self-guided walking tour to visit the attractions featured in this article. The app turns your mobile device into a personal tour guide and it works offline, so no data plan is needed when traveling abroad.