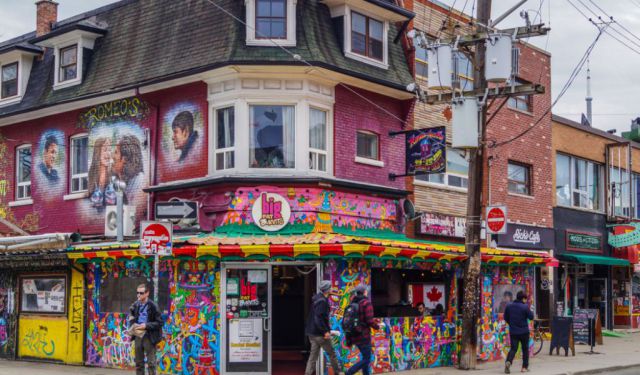 The Best of Toronto, Toronto, Canada (B)

Kensington Market is Toronto’s most diverse and fascinating neighborhood. This means a lot considering that Toronto is one of the most multicultural cities in the world. The city has many ethnic neighborhoods like Chinatown, Koreatown, Little Italy, and Little India. While these enclaves are mainly occupied by a specific ethnic group, in Kensington Market they all mix together resulting in a weird and unique place.

The history of the neighborhood starts in the 1880s when small houses were built to accommodate Irish and Scottish immigrants. In 1910, the area received a massive wave of Jewish immigrants. The area became known as ‘The Jewish Market’ because people used to sell things in front of their houses. After World War II, the Jewish population was replaced by immigrants from Caribbean, the Middle East, South America and Asia. Each wave of immigrants contributed to add more color and diversity to the area we see today.

Kensington Market is a celebration of Toronto’s multicultural heritage. Its charm derive from its chaotic scenery. The remaining Victorian houses are painted in vibrant colors. There’s beautiful graffiti everywhere. Second hand clothes stores, burger joints, organic fruit stands, vegan ice creams, and tattoo shops coexist side by side. The area is filled with strange and wonderful shops, cafes and restaurants. ...... (follow the instructions below for accessing the rest of this article).
This article is featured in the app "GPSmyCity: Walks in 1K+ Cities" on iTunes App Store and Google Play. You can download the app to your mobile device to read the article offline and create a self-guided walking tour to visit the attractions featured in this article. The app turns your mobile device into a personal tour guide and it works offline, so no data plan is needed when traveling abroad.