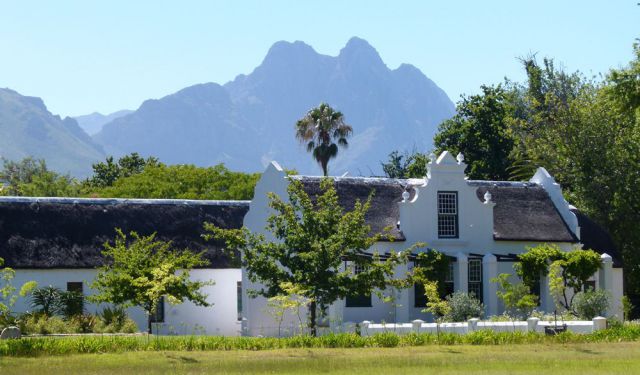 Stellenbosch is a stately town. From the starched linen cloths on the tables outside the restaurant to the wide roads lined with ancient oak trees, the whole of South Africa’s second oldest town has a period feel to it. And, as I found out, exploring by foot is the best way to discover the town’s heritage, with one or two surprises along the way.

One of the pleasures of walking through Stellenbosch is the number of old buildings. They come in a variety of architectural styles, reflecting the long history of the town, but the result is surprisingly harmonious. Stellenbosch was built as a European type village in the 17th century but suffered a series of fires, leading to later rebuilding in varying styles. So the buildings are a mixture of early Cape Dutch, Victorian and Art Deco architecture, with a 20th century revival of classical Dutch features.

Some of the older buildings (such as the jail) have now been converted to private use, but there are still lots of historical buildings that you can visit. Some of these are in use as hotels or restaurants; others are museums. Then there is Oom Samie se Winkel (“Uncle Sam’s Shop”), the oldest shop in Stellenbosch and a reminder of a bygone age. ...... (follow the instructions below for accessing the rest of this article).
This article is featured in the app "GPSmyCity: Walks in 1K+ Cities" on iTunes App Store and Google Play. You can download the app to your mobile device to read the article offline and create a self-guided walking tour to visit the attractions featured in this article. The app turns your mobile device into a personal tour guide and it works offline, so no data plan is needed when traveling abroad.