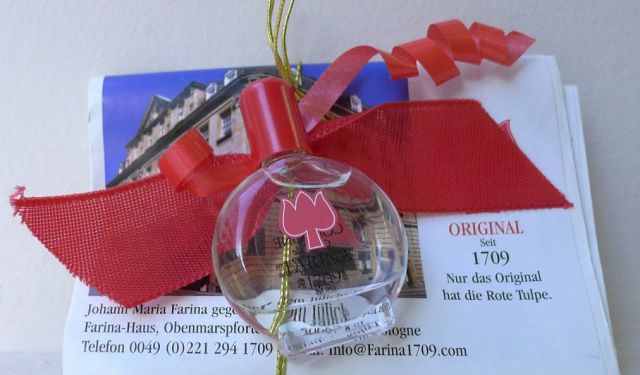 The Cologne Wars – Who Comes out Smelling Like a Rose?, Cologne, Germany (B)

I love perfume. like, looooove it. I probably have over 50 bottles, spritzers, misters, and vials, in every imaginable manifestation: oils, sprays, dabbers, aerosols, testers, creams, lotions, and even in solid form. When I die, they won’t have to embalm me; they can just pickle me in all my fragrances, because I’ll never use them all up during my lifetime.

Luckily, I’m not alone in my love of the fragrant stuff. Millions of people around the globe share in my obsession. Perfume is a multi-billion-dollar industry. Around $30-40 billion a year, in fact. We’ve been schmearing, spritzing and dabbing ourselves with fragrance for thousands of years, and with no signs of stopping anytime soon.

Of course, many would argue that the French are some of the most skilled, prolific perfumers in the world. But, did you know that it was an Italian living in Germany who changed the perfume industry forever?

Giovanni (Johann) Maria Farina was born in 1685 in Italy. He moved to Cologne, Germany, and decided set up a perfume shop, which opened in 1709. Farina used oils and ingredients reminiscent of his home in the Mediterranean, such as lemon, lime, jasmine and rosemary. His recipe was quite a departure from the heavier, musky fragrances popular in Europe at the time. This combination of fragrances mixed with alcohol was an innovative approach, but perhaps it was this unique combination that helped make his perfume so popular. Even the aristocracy became enamored of his fragrance, which he named “cologne” after his new hometown. His fragrance was favoured by Mozart, Napoleon, and Queen Victoria of England, just to name a few. ...... (follow the instructions below for accessing the rest of this article).
This article is featured in the app "GPSmyCity: Walks in 1K+ Cities" on iTunes App Store and Google Play. You can download the app to your mobile device to read the article offline and create a self-guided walking tour to visit the attractions featured in this article. The app turns your mobile device into a personal tour guide and it works offline, so no data plan is needed when traveling abroad.