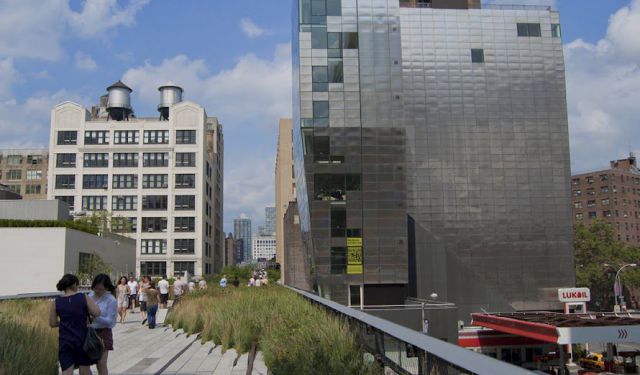 The West Side line of the New York Central Railroad was long known as the lifeline of New York since much of the city depended on the transportation of milk, poultry, meat, and other express merchandise along this, the only all-rail freight line on Manhattan Island. The street-level tracks authorized in 1847 were, however, a terrible liability. Over the next 80 years, so many accidents occurred that men known as the West Side Cowboys rode on horseback ahead of the trains, waving red flags. Ironically, essential parts of the ‘lifeline’ became deadly: 10th Avenue, for instance, was nicknamed ‘Death Avenue’.

In 1929, the city, the railroad company, and the State of New York agreed to a plan that would ultimately cost over $150 million dollars, the equivalent of approximately 2 billion today. The West Side Improvement Project, incorporating the High Line, an elevated structure with at least 14-foot clearance, eliminated 105 ground-level railroad crossings. The 13-mile-long line, running from 34th Street to the newly constructed St. John’s Park Freight Terminal, connected directly to factories and warehouses built specifically for sidetrack service, allowing trains to roll right into them. ...... (follow the instructions below for accessing the rest of this article).
This article is featured in the app "GPSmyCity: Walks in 1K+ Cities" on iTunes App Store and Google Play. You can download the app to your mobile device to read the article offline and create a self-guided walking tour to visit the attractions featured in this article. The app turns your mobile device into a personal tour guide and it works offline, so no data plan is needed when traveling abroad.