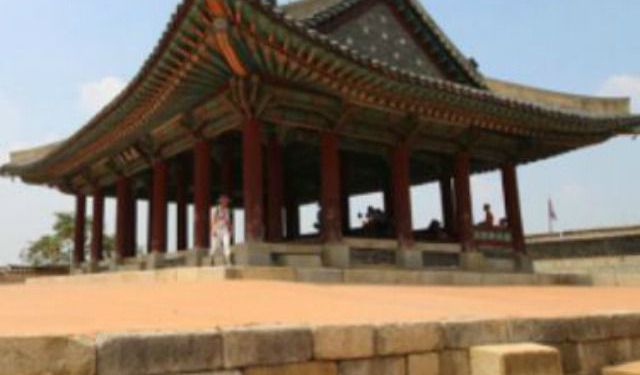 The Other Side of the Wall, Suwon, South Korea (B)

Suwon‘s 5.74 Km UNESCO World Heritage Hwaseong Fortress — within its stony confines — offers a glimpse into Korea’s royal past. As with most world heritage sites, the town around the wall hasn’t stopped for time. The whirr of motorised vehicles and rush of everyday traffic dominate the scene, leaving behind nuggets of the old world, in a state of confusion, in-between the crossroads of time. After surrendering to the heat and covering more than half the wall on the Hwaseong Train, we reached the Archery Training Grounds. Continuing from where I left off in my last post…

Many excited tourists were queuing to try their luck with the bow, not Basil though. He didn’t seem to be the least bit interested in the event. And I’ve never been known for my sporting/athletic/target skills. So, we sat for a while, turned spectators, and watched tourists double up as participants and test out their skills with the target. A coach instructed participants to hold the bow and arrow, and aim for the target in front of them (probably, half way through the length of the field). It was refreshing to see men and women compete together, on the same platform, and for a woman to emerge as the winner in this informal competition of sorts. ...... (follow the instructions below for accessing the rest of this article).
This article is featured in the app "GPSmyCity: Walks in 1K+ Cities" on iTunes App Store and Google Play. You can download the app to your mobile device to read the article offline and create a self-guided walking tour to visit the attractions featured in this article. The app turns your mobile device into a personal tour guide and it works offline, so no data plan is needed when traveling abroad.

Create Your Own Self-Guided Walks in Suwon
Guide Name: The Other Side of the Wall
Guide Location: South Korea » Suwon
Guide Type: Self-guided Walking Tour (Article (B))
Author: Cheryl Dsouza
Read it on Author's Website: https://twobrownfeet.com/2016/10/13/the-other-side-of-the-wall/
Sight(s) Featured in This Guide: