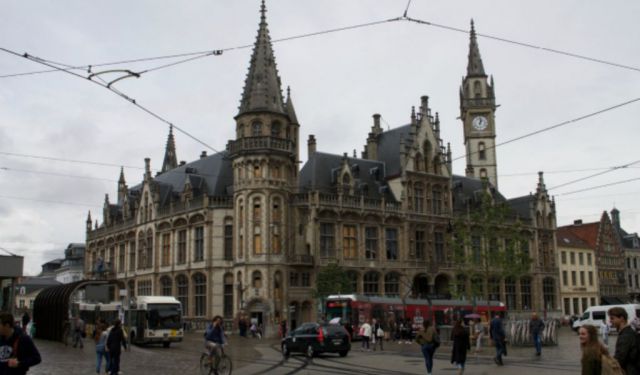 Ghent is located in the Flanders region of Belgium. A beautiful city, Ghent was first established in the mid-600s, and thanks to its location (at the confluence of the Rivers Scheldt and Leie) it rose to through the ranks to become one of Europe’s most popular and richest cities by the late-Middle Ages.

Although it is currently the second largest municipality in Europe, Ghent is often passed over by travellers in favour of it’s more famous neighbour Bruges. While the two cities have many things in common, including intricate canal systems and homes sporting the famous crow-stepped gable, the two towns are also very distinct.

Ghent is a “city with an interesting crossover between open cosmopolitanism and the quiet atmosphere of a provincial town.” (source) Ghent has struck the perfect balance of old world charm and modern convenience and is a must-see for anyone travelling through Belgium.

We arrived in Ghent via train. The trip from Bruges was fast, cheap and the trains were frequent—it was a weekday and they were listed as running as often as every half hour. The train took no more than 30 minutes to get to Gent-St-Pieters station (the cities main station) and gave us the most picturesque tour of the Belgian countryside. ...... (follow the instructions below for accessing the rest of this article).
This article is featured in the app "GPSmyCity: Walks in 1K+ Cities" on iTunes App Store and Google Play. You can download the app to your mobile device to read the article offline and create a self-guided walking tour to visit the attractions featured in this article. The app turns your mobile device into a personal tour guide and it works offline, so no data plan is needed when traveling abroad.