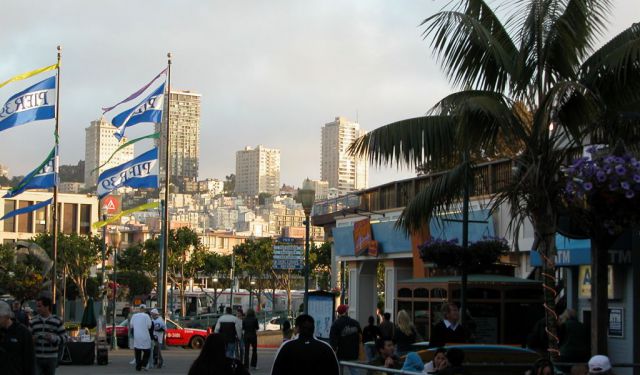 The suspension of disbelief begins as you descend from the skytoward San Francisco International Airport. The plane drops and drops again, closer and closer to the sea, never revealing the land it is aiming for until you're right above it. And then, after so much anticipation, it is over and you are taxiing nonchalantly along the runway.

The airport personnel are as warm as the temperate climate, such a change from the false, frozen grimaces of those in the North. They may have forgotten how to smile, but in San Francisco, you remember.

Your first sight of the surrounding hills, some rising 1,000 feet on the way into the city, is impressive. Everything is unexpected for someone who has never spent much time in the desert or the tropics. It is so arid the few sparse trees and buildings cling to what’s left of the sandy turf. You can imagine the houses to be made of dried clay.

The hotel is as eclectic and cluttered as it appeared in the ads. There is a doorman, but you get the feeling it may be something less than a part-time job. He’s wearing a uniform and he helps you into the ancient cage of the elevator with your bags, but later you see him down the street on a stoop, smoking a stogie. ...... (follow the instructions below for accessing the rest of this article).
This article is featured in the app "GPSmyCity: Walks in 1K+ Cities" on iTunes App Store and Google Play. You can download the app to your mobile device to read the article offline and create a self-guided walking tour to visit the attractions featured in this article. The app turns your mobile device into a personal tour guide and it works offline, so no data plan is needed when traveling abroad.