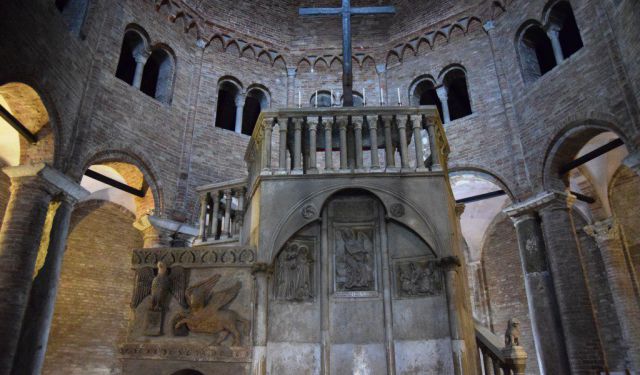 The Seven Secrets of Bologna: True or False?, Bologna, Italy (B)

Bologna has a considerable number of little quirks, legends and secrets to be discovered. Trying to find them makes for an exciting cultural treasure hunt around the city centre, from the main Piazza Maggiore and the Statue of Neptune to the intriguing church of seven churches.

After hearing about Bologna’s seven secrets, or sette segreti, from a friend, I googled internet sources for more information. As seems to be a growing trend, internet blogs and websites provided me with the same repeated, if re-hashed, descriptions of these seven places, clearly written by people who had never actually been to investigate in person. So I went to see for myself and came away with some interesting results, and a couple of additional secrets!

Piazza Maggiore is generally the first stop for tourists to Bologna. After visiting the Duomo, directly opposite you can find the first of Bologna’s many secrets. Beneath the Palazzo della Podestà there is an arched vault with frescoes on the ceiling. By some miracle of engineering, this vault manages to transmit sounds from one side to another as clearly as a telephone. Stand in one corner of the vault facing the wall and have a friend stand diagonally opposite, and you will find their voice emanating mysteriously from the wall. A resounding tick for the first secret, and a prize for anyone who can tell me how the magic (or science) works! ...... (follow the instructions below for accessing the rest of this article).
This article is featured in the app "GPSmyCity: Walks in 1K+ Cities" on iTunes App Store and Google Play. You can download the app to your mobile device to read the article offline and create a self-guided walking tour to visit the attractions featured in this article. The app turns your mobile device into a personal tour guide and it works offline, so no data plan is needed when traveling abroad.