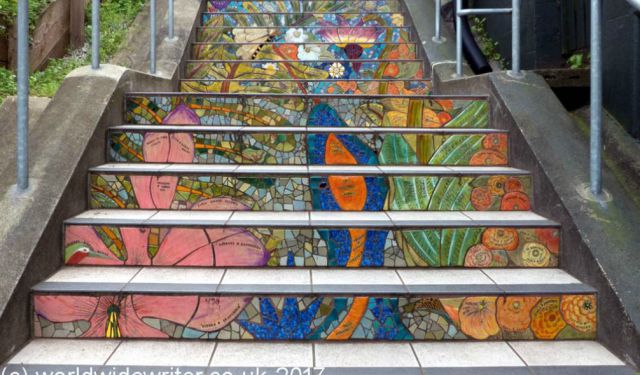 San Francisco is built on 49 hills – not just ordinary slopes, but tall steep inclines. Yet the city’s early planners and developers chose to lay out the roads in a grid pattern, paying no heed to contours. This resulted in some very steep streets, causing problems for the people who lived and worked there.

Some of the hills were so steep that access was impossible in the early days, even with horse-drawn carriages. San Francisco’s famous cable cars were one response to the issue. Another solution was the building of pedestrian stairways.

There are reputedly 300 stairways in San Francisco, providing shortcuts between streets at different levels, or leading to otherwise inaccessible peaks. Most of them are strictly functional, but some are pleasant walks in themselves, or have their own individual features. I have previously written about the steps to the top of Telegraph Hill, but on my recent trip to San Francisco I managed to explore more of the stairways.

Unusually, there is a slight deviation from the grid pattern as the streets swirl around the appropriately named Grandview Park, in San Francisco’s Inner Sunset. There are a few different stairways here, but the ones I wanted to see were the 16th Avenue Tiled Steps, which run from 16th Avenue/Moraga Street towards 15th Avenue (this is part way up the hill: there is more climbing to do if you want the view from the top). ...... (follow the instructions below for accessing the rest of this article).
This article is featured in the app "GPSmyCity: Walks in 1K+ Cities" on iTunes App Store and Google Play. You can download the app to your mobile device to read the article offline and create a self-guided walking tour to visit the attractions featured in this article. The app turns your mobile device into a personal tour guide and it works offline, so no data plan is needed when traveling abroad.