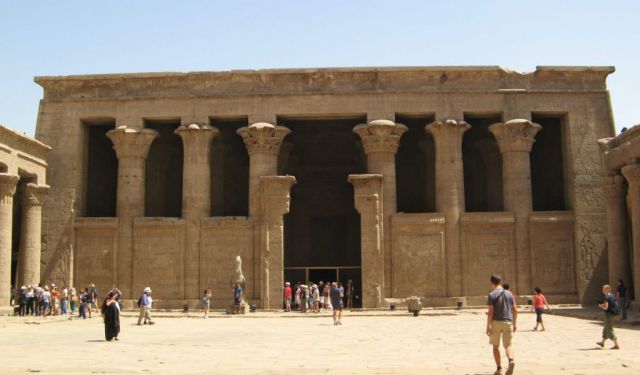 The Temple of Edfu is one of the best preserved temples in Egypt. It’s also the second largest temple in all of Egypt, with the Temple of Karnak being the first.

The Temple of Edfu was originally dedicated to the falcon god, Horus of Behdet (the original name for Edfu). It was built on top of the remains of an older, smaller temple dedicated to the same god.

The ancient Egyptians believed that this was the location where the infamous battle between Horus and Seth took place. Horus was the sky god, whose eyes were the sun and moon. Seth, on the other hand, was the god of chaos, and Horus’ uncle. They battled to determine who would succeed Osiris as king.

In the story, Horus and Seth had various competitions to determine the successor. Horus beat Seth in every competition, and was eventually declared the king of Egypt.

Egypt was very prosperous at the time the shrine was built, which is why it’s so immense. It was built during the Ptolemaic Dynasty, between 237 and 57 BC. Ptolemy III started construction of the building on August 23, 237 BC. But it took 180 years to complete. By this time, Egypt was under the rule of Ptolemy XII Neos Dionysos, Cleopatra VII’s father. It’s important to note that the Ptolemies were actually Greek. but they presented themselves to the Egyptians as native pharaohs. ...... (follow the instructions below for accessing the rest of this article).
This article is featured in the app "GPSmyCity: Walks in 1K+ Cities" on iTunes App Store and Google Play. You can download the app to your mobile device to read the article offline and create a self-guided walking tour to visit the attractions featured in this article. The app turns your mobile device into a personal tour guide and it works offline, so no data plan is needed when traveling abroad.